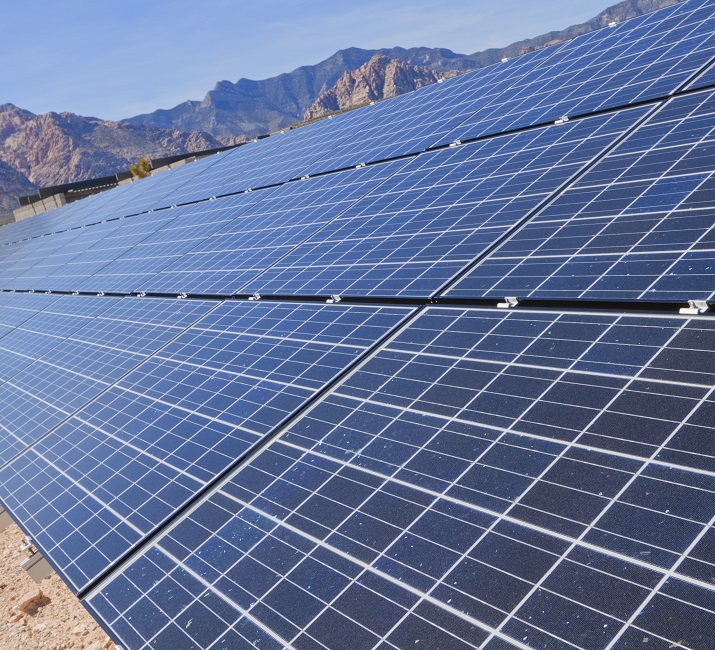 U.S. fixed-tilt and single-axis tracking costs fell by around 6% in the first quarter of this year. (Image credit: Andrei Orlov)

The average cost of U.S. utility-scale fixed-tilt solar plants fell by 6.2% in the first quarter of this year, to $0.99/watt, GTM Research said in its latest quarterly market report. The cost of single-axis tracking projects slumped 5.9% to $1.08/W, it said.

"Total system pricing continues to trend downward across all market segments, much in the same manner it has since Q3 2015...primarily driven by the global module demand and supply imbalance, hardware markets produced aggressive component price declines in Q1 2017," GTM Research said.

"Hardware costs fell by 6%, 7%, 10% and 9% in the residential, non-residential, fixed-tilt and single-axis tracker market segments, respectively," it said. The US installed 1.1 GW of utility-scale solar capacity in the first quarter, representing half of all solar installations, GTM Research said.

The research group has adjusted downward its utility-scale installation outlook for 2017 to account for grid connection delays on projects in Carolinas and Oregon but it has lifted its outlooks for 2018 and 2019.

"The majority of utility solar installations slated for 2017 remain driven by projects that pushed out their completion dates from 2016 as a result of the federal [Investment Tax Credit] extension. Utility solar is on the cusp of another boom in procurement, with the majority of utility solicitations focused on maximizing the number of projects that can come on-line with a 30% federal ITC in 2019 or later by leveraging commence-construction rules," it said. Solar power purchase agreements [PPAs] have recently been signed at prices between $35/MWh and $50/MWh, it said. 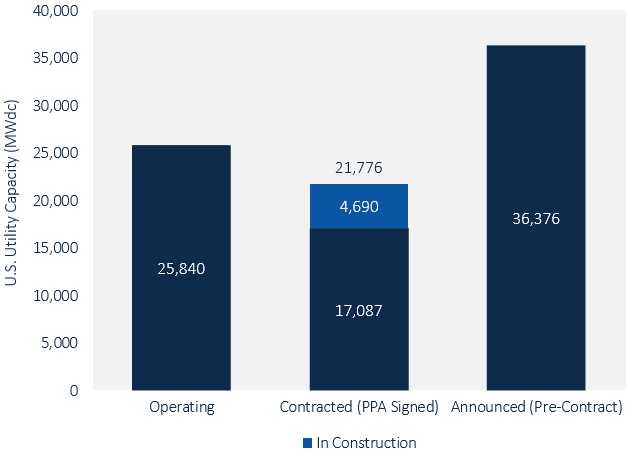 The ITC is currently reviewing a request by bankrupt solar manufacturer Suniva to introduce an import tariff on solar panels of $00.40 per watt and a minimum price for modules of $00.78/W. Suniva and co-petitioner SolarWorld argue that low-priced panels from Asia are damaging the U.S. solar manufacturing industry.

The proposed measures would roughly double the price of solar modules in the U.S. and cut new solar installations in 2018-2022 from an expected 72.5 GW to 36.4 GW, according to GTM Research.

"Utility-scale solar is most at risk, with more than 20 GW already at risk of cancellation if module prices fall back to 2012 levels," the research group said.

"A majority of utility PV procurement now hinges on solar being cost-competitive with natural gas alternatives, with nearly three-fourths of the utility PV pipeline procured outside renewable portfolio standards. Under [Suniva's proposal], most of that pipeline is at risk of cancellation unless [power purchase agreement] prices are renegotiated," it said.

The ITC is expected to make its recommendations to the Trump administration by September but the case is already impacting the U.S. market, the New York Times reported June 30.

Prices of solar panels have increased as some buyers have pre-empted potential tariff increases, while some developers have questioned long-term purchase commitments at prices that could become uneconomical if tariffs are applied retroactively, the paper reported.

The Solar Energy Industry Association (SEIA) is firmly against the proposed protection measures and has warned they could put 88,000 solar jobs at risk.

Prior to the case, U.S. solar firms predicted employment in the solar sector would rise by 10% in 2017 to around 286,000 workers, following a record 25% rise in 2016, according to the Solar Foundation's National Solar Jobs Census 2016 published in February.

U.S. solar industry employment was estimated at 260,077 at the end of 2016, following the largest annual growth since the census began in 2010. The strongest growth in solar jobs was seen in project development, research and development (R&D) and finance roles, where job numbers rose by around 54% last year.

If the ITC finds that imports are harming domestic producers, President Trump would make the final decision on any remedies.

Low U.S. natural gas prices and flat demand for electricity are the main drivers behind the closure of some coal and nuclear power plants, rather than state and federal policies supporting renewable energy projects, according to a report by consulting firm Analysis Group commissioned by the Advanced Energy Economy (AEE) group and the American Wind Energy Association (AWEA).

AEE and AWEA commissioned the report after Energy Secretary Rick Perry ordered a study of the electricity grid to determine whether support for solar and wind energy is accelerating the retirement of coal and nuclear facilities. The government's 60-day study is expected to be published in the coming weeks.

In its report, the Analysis Group said current wholesale market frameworks and support measures for renewable energy do not appear to be significant drivers of coal and nuclear power plant closures.

Fundamental market forces such as flat demand for electricity, low natural gas prices since the mid-2000s and the addition of significant amounts of highly efficient new gas-fired resources since 2000, are primarily responsible for impacting the profitability of merchant generating assets, the report said.

"The Analysis Group report has now been submitted to the U.S. Department of Energy to inform its review," AEE and AWEA said in a statement.

A sharp drop in battery costs has made 'behind the meter' energy storage an economical option for many commercial power customers in mature markets such as U.S. and Europe, McKinsey consultancy said in a report published in June.

Battery pack costs fell from $1,000 in 2010 to below $230/kWh in 2016 due to rising lithium-ion manufacturing capacity on the back of growing demand for electric vehicles and other electronic products, the consultancy said.

As U.S. and Europe roll back solar incentives, the use of 'behind the meter' solar with storage, otherwise known as partial grid defection, is becoming an attractive opportunity for many power customers, McKinsey said.

"We believe these markets will continue to expand, creating a significant challenge for utilities faced with flat or declining customer demand. Eventually, combining solar with storage and a small electrical generator (known as full grid defection) will make economic sense—in a matter of years, not decades, for some customers in high-cost markets," it said. Utilities should prepare for growth in grid defection by restructuring grid access fees and investing in analytics to modernize the grid, McKinsey said.

Utilities can also benefit from the falling cost of 'in front of the meter' storage systems in the coming years, it said.

Some utility-scale uses of energy storage are already economical provided they are supported by appropriate regulation. By 2020, the economics of energy storage for wholesale energy arbitrage, renewable energy smoothing, and load following is set to improve significantly, McKinsey said. India-based Sterling and Wilson has won the turnkey engineering procurement and construction (EPC) contract and operations and maintenance (O&M) contract for the 1.2 GW Sweihan solar power plant project in Abu Dhabi, U.A.E., the company said in a statement.

The Sweihan plant will be the largest solar plant in the world to date. Last year, a consortium consisting of Japanese investment company Marubeni, China's Jinko Solar and the Abu Dhabi Water and Electricity Authority (ADWEA) bid a world record-low tariff of $24.2/MWh to win the project.

The plant is to be built on an area of 7.8 square kilometres and construction is expected to take 23 months, Sterling and Wilson said.

Sterling and Wilson is the leading solar EPC company in India, which now ranks as the third largest market for new solar power installations, behind China and the U.S.

India is forecast to install 10 GW of solar power in 2017, IHS Markit consultancy said in April.