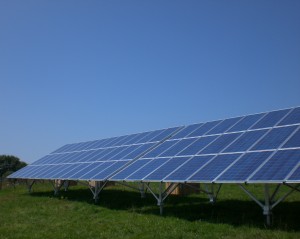 Neoen will own 120 MW while eight other reputable investors will own the...

Neonen recently announced that it is completing the financing for the project and starting construction of the developed facility located in the town of Cestas near Bordeaux. The facility will consist of several power plants with a combined power output of 300MW.

Neoen will own 120MW, with investors owning the balance of 180MW.

A French consortium of constructors have been selected for the project including Eiffage- Clemessy, Schneider Electric, and Krinner, which will also be responsible for operation and maintenance activities.

Total investment going into the project will exceed EUR360 million. The solar park once completed will be connected to the high voltage grid and is expected to be operation by October 2015.

Xavier Barbaro, CEO of Neoen, said, "We are proud to have completed development of this unique project, thereby heralding a new era in the history of renewable energies in France. These power plants will constitute the largest and one of the most competitive photovoltaic solar parks in Europe, demonstrating the ability of this technology to play a leading role in the French and European energy mix.”

First Solar restores idle capacity in US and Asia

First Solar is still hiring in Malaysia, according to local online job sites. The thin film module maker and solar developer is also preparing to restore its idled production lines at its main production plant in Malaysia bringing back 360MW of capacity, say media reports.

In addition to bringing on more capacity in South East Asia, First Solar is also set to add two new lines at its facility in Ohio, providing a further 100MW of nameplate capacity in 2015.

The changes to the US ITC as well as a number of international markets that are building demand were also cited for need for extra capacity, according to a PV-Tech report.

First Solar also said it was delaying the major ramp and introduction of its Series 4 CdTe thin-film modules until next year, due to customer orders specifically for its Series 3 modules.

NanoFlex Power Corporation, a specialist company that develops, commercialises and licenses advanced photovoltaic technologies and intellectual property, has reported that its research partner, the University of Michigan, has won a $1.35m cooperative award under the U.S. Department of Energy SunShot Initiative.

The University of Michigan was selected as part of SunShot's "Next Generation Photovoltaics 3" programme and was the only project awarded for organic photovoltaic ("OPV") research and development.

Under the award, the University of Michigan will advance the practical viability of OPV by demonstrating reliable, large area and high-efficiency organic multi-junction cells based on small molecule materials systems.

Dr. Stephen Forrest, the Paul G. Goebel Professor of Engineering in the Departments of Electrical Engineering and Physics at the University of Michigan, stated in a media release, "We believe OPV technologies are reaching an inflection point, as evidenced by the accelerating advances in conversion efficiency and lifetime. OPV's ability to utilize low cost materials and manufacturing processes present the potential to redefine the cost structure of the solar industry and introduce solar power to untapped applications."

As part of this project, NanoFlex Power will work with potential customers and industry partners to achieve rapid acceptance and deployment of OPV technology.

NanoFlex Power's research contract with the University of Southern California and the University of Michigan grants it exclusive commercial license rights to one of the most extensive portfolios of OPV intellectual property, consisting of more than 750 issued or pending patents worldwide covering materials, architectures, and fabrication processes for organic and inorganic flexible, thin-film PV technologies.

Solar Cloth gets ready for investor pitch and product trial

The Royal Bank of Scotland has named British solar product developer, The Solar Cloth Company, as a Finalist in the UK’s largest search for new ‘green’ innovation.

The major international search is looking for companies presenting and ready to provide new ways to reduce energy, water and waste.

Launched in March this year, the RBS Innovation Gateway attracted more than 140 submissions in just 40 days, from brand new concepts through to market-ready products and services, from innovators and small businesses (SMEs) around Britain and the world, from Perth in Scotland to Perth in Western Australia.

The best ideas will be tested on the RBS estate of 2,500 buildings and branches across the UK.

Perry Carroll, Founder of the solar innovation company said that the RBS panel recognition is an honour that recognises the many years of “hard work and perseverance that has led us to this point and gives us the opportunity to work with RBS to reduce their considerable energy costs.”

In other company news, The British Photovoltaic Association has chosen The Solar Cloth Company to pitch in front of experienced investors. The Solar Cloth Company has been shortlisted as one of four companies to present a 10 minute presentation before experienced investors including: Arne Morteani a Principal at ETF, Duncan Webster Investment Consultant, Aratus Capital and Alex Gilbert Investment Manager for Amber Infrastructure.

Ascent Solar Technologies, a developer and manufacturer of flexible thin-film photovoltaic modules, has signed Hitfar Concepts Ltd. as the preferred distribution partner of its EnerPlex consumer products in Canada.

Hitfar is Canada’s largest wireless accessory distributor, working with all the major Canadian telecommunications companies, such as Bell, Rogers & Telus as well as National Retailers like Glentel, Canada’s largest independent mobile phone retailer who operate over 500 locations across the country.

Richard Hashim, General Manager of EnerPlex said, “The Canadian market provides a strong brand and revenue growth opportunity; and our partnership with Hitfar will allow us to immediately leverage their robust distribution network across Canada.”

“In our view, EnerPlex products represent and enable a shift in how consumers in Canada and across the world, will use their portable electronics in the future, and we are extremely excited to be part of that,” said Jason Osborne, Sr. Manager – Product & Inventory at Hitfar.

EnerPlex offers a complete portable power solution by uniting its transformational lightweight and rugged solar with power storage solutions for consumers on the go. With ruggedized products, which can withstand even the harshest environments, EnerPlex provides the ultimate charging solution for consumers who want to get off the grid.

When completed, the facility will produce 45 million kilowatt-hours (kWh) of clean solar electricity per year, sufficient to power approximately 14,000 average homes or approximately 25% of the estimated 55,400 households in the city of Oxford. More than 483,000 of First Solar's advanced thin film modules will be used to power the facility, while Belectric is responsible for the construction and the Balance-of-Systems (BoS) requirements.

The project is the fourth to be executed in the UK between a joint venture of the two companies, which first was established in 2013. With its recently built solar farms in Wiltshire and East Anglia, the JV is expecting to reach a total capacity of 80 MWDC in the UK. Together, the farms generate almost 80 million kWh of clean energy per year, while displacing an estimated 35,000 tons of greenhouse gases each year.

"There is no doubt that, thanks to the UK's renewable energy roadmap, solar PV will help reinforce the country's efforts to address its need for sustained energy independence," said Christopher Burghardt, Vice President for Europe at First Solar.

The project will be in compliance with stringent sustainability standards designed to minimize its impact in the local environment, and to support biodiversity initiatives. Furthermore the land under the solar farm will continue to remain in food production, with sheep grazing the site as was the case before the project was constructed.

Martin Zembsch, Chief Sales Officer, Belectric said: "This project, and the others before it, demonstrates that we can remain competitive in a wide range of regulatory environments thanks to our singular focus on quality, reliability and competitiveness."

"When we connect this project in the coming months, it will be the UK's largest and most technologically advanced solar energy plant, incorporating the latest innovations delivered by both Belectric and First Solar," said Toddington Harper, CEO of Belectric UK.

He continued: "To put it in context, this single project will produce enough secure, home-grown, solar energy to drive an electric vehicle over 200 million kilometers per year, or the equivalent of approximately 260 round trips to the moon. Combined with the fact that the land under the solar arrays will remain in agricultural use, with areas set aside to support biodiversity, this is a prime example of the multiple benefits that best-in-class solar farm projects can deliver to the UK."

Solar-Tectic, a thin film specialist developer, has reported that the U.S. Patent and Trademark Office has allowed "Method of Growing Heteroepitaxial Single Crystal or Large Grained Semiconductor Films on Glass Substrates and Devices Thereon," which is the "1c-Si Laser Eutectic" Solar-Tectic technology.

This technology is for the growth of highly crystalline semiconductor films -- single crystal or large grained -- directly on soda-lime glass and promises to be a major breakthrough in the semiconductor, solar industry, with applications in various industries.

The company has recently been accepted as a member of iClean, a group of start-up companies that receive support at the Colleges of Nanoscale Science and Engineering (CNSE) at SUNY Polytechnic Institute in Albany, New York.

Incubators for Collaborating and Leveraging Energy and Nanotechnology (iClean) was founded by CNSE and the Hudson Valley Center for Innovation in 2010.  Funded primarily through the New York State Energy Research Development Authority (NYSERDA) and supported by the National Science Foundation (NSF), iClean works with clean energy, nanotechnology, and biotechnology companies throughout New York, the Northeast, and the rest of the country.