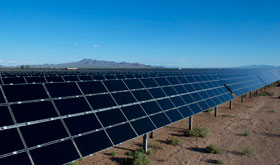 The Solar Gen 2 project spans three sites - each of which is approximately a 50...

The Solar Gen 2 project spans three sites - each of which is approximately a 50-MW grid-connected solar photovoltaic (PV) system - comprising a combined 1,451 acres of land in Imperial County, California. The project will consist of more than one million thin-film PV solar modules mounted on single-axis tracking tables manufactured by First Solar.

The acquisition fits Southern Power's business strategy of growing the wholesale business in targeted markets through acquiring generating assets and building new units, the output of which is significantly covered by long-term contracts.

"We value the strong, successful track record we have with Southern Power," said First Solar Chief Executive Officer Jim Hughes. "We're pleased to continue that relationship with Solar Gen 2 and we look forward to further opportunities to work together."

The Solar Gen 2 facility is being built and will be operated and maintained by First Solar. Construction of the project began in 2013. Completion of the project is expected to occur later in the fourth quarter 2014. Southern Power will initially own 100 percent of the project, with First Solar agreeing to acquire a minority interest subject to certain terms and upon fulfillment of certain conditions.

Electricity generated by the plant is contracted to serve a 25-year power purchase agreement with San Diego Gas & Electric Company (SDG&E), a subsidiary of Sempra Energy.

Southern Power has previously acquired seven solar facilities with Turner Renewable Energy, with Southern Power's ownership of the facilities totalling 262 MW. The acquisition of Solar Gen 2 is expected to increase the total Southern Power-owned solar capacity to 338 MW. The total generation capacity of the eight projects is anticipated to be 441 MW.

Beneq, a supplier of production and research equipment for thin-film ALD and aerosol coatings, and Royal DSM, the global Life Sciences and Materials Sciences company, are working together to develop and commercialise a completely new and superior aerosol deposition technology for AR coatings for solar glass applications.

Beneq will contribute its recently released nFOG™ aerosol coating technology while DSM will provide its KhepriCoat® AR coating. The combination of these two technologies provides an AR coating solution that is ideal for applications that require a superior coating quality on solar glass, said Beneq.

“The demands of the solar market industry in terms of quality are increasing,” said Oscar Goddijn, Vice President of DSM Advanced Surfaces.

He continued: “We’re delighted to partner with Beneq, which has established itself as an undisputed leader in the development of innovative deposition technologies for the solar industry…Together, we’ll be able to leverage and amplify our unique areas of expertise to offer the solar market the next generation of AR coating technology that’s designed to meet their needs.”

DSM’s KhepriCoat is an anti-reflective coating technology for solar cover glass, which was developed to maximize light transmission by minimizing reflection, which can lead to an energy gain in solar module output in the range of 4%. KhepriCoat can be used in a wide range of solar applications, including c-Si, thin-film, concentrated photovoltaic modules and solar thermal collectors.

KhepriCoat is claimed to improve the cost-to-performance ratio, lowering both the cost/Watt-peak (Wp) and the Levelized Cost of Energy (LCOE).

Innovnano Materials, a specialist manufacturer of high performance ceramic powders, has developed a range of nanostructured AZO (aluminium-doped zinc oxide) specifically for the production of high density sputtering targets, the company has reported.

In a statement, the company explained that the AZO sputtering targets provide researchers with a highly optimised and cost-effective tool for the development of next generation transparent conducting oxide (TCO) thin films, applicable to numerous research areas ranging from solar cells to conducting glass.