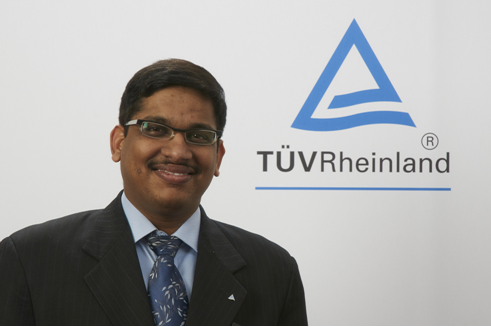 "Sriperumbudur (India) will be the 5th and latest testing facility under...

Set up over an area of 5,000 sq. ft., the PVKlima project has been spearheaded by TUV Rheinland in collaboration with the Government of Germany, with an aim to answer the fundamental questions regarding the extent to which climatic factors have an impact on the energy yield of Solar PV modules, it has been reported.

According to the Global Research and Development study initiated by TÜV Rheinland group in cooperation of Government of Germany, long-term behaviour and performance of thin film PV modules is required to be studied under different geographical conditions with different tropical conditions.

As per the study, the modules will be exposed to sunlight for a period of four years, said the testing specialist, and their performance will be monitored in terms of how much energy they generate in different environmental conditions. This data will be used for further analysis and to stream line the Solar technology and its benefits globally.

There are a total of five sites that have been selected across the globe keeping the temperatures, humidity ranges and sun directions as the criteria for selection. The proposed sites are Ancona, Italy to test the effects of Mediterranean weather conditions; tropical hot and humidity conditions in Chennai, India, Arid; and dry and hot conditions in Arizona; and desert conditions in Saudi Arabia.

"The special features of the various Solar PV technologies would be analyzed with regard to the climate effects, seasonal effects, low-light behavior, temperature behavior and spectral behaviour."

According to Varma, the research results will then be used to improve computer programmes used to calculate and forecast energy yields and thereby minimise risks for the operation of photovoltaic systems from the perspective of investors and operators.

The Chennai facility will be a major boon to thesSolar PV modules manufacturers in India as they can get critical inputs from this project regarding the technological improvement of their products, said Varma.

Ascent Solar Technologies, a maker of flexible thin-film photovoltaic modules and owner of  EnerPlex™ solar consumer products, has made a final closing on its $35m funding round.

The company has issued a combination of $32m principal amount of senior secured convertible notes, $3m of Series D convertible preferred stock and warrants to purchase shares of its common stock. At closing, Ascent received unrestricted access to $4.5m, while the remaining $30.5m of gross proceeds have been deposited into a restricted control account of the Company.

Ascent intends to use the proceeds of the offering to fund the continued operations and expansion of its retail channels for its EnerPlex products in the US, Europe and Asia, brand building, as well as the launch of additional EnerPlex products.

The economic terms of the notes and the Series D Preferred Stock are substantially similar.

The company has also entered into a distribution deal with Navarre, a unit of WYNIT Distribution LLC, for the Colorado solar technology company's EnerPlex line of photovoltaic-powered consumer products.

The deal is aimed at expanding its retail channel in North America. It noted Navarre's "long history of connecting brands and consumers through their partnership with well-known retailers."

Solar Frontier has completed the installation of its CIS solar modules at a Japanese sake brewery on Sado Island, Japan. Using a building that until four years ago housed an elementary school, the CIS thin-film modules will be used to make Obata Brewery’s new brew called “Gakko Gura” (“School Cellar”).

The solar initiative is part of Obata Brewery’s “Gakko Gura Project”, with Obata Brewery leasing the former school building from Sado City in an effort to give it a second life.

Sado City and IR3S (The University of Tokyo Integrated Research System for Sustainability Science) have partnered for the first time with Solar Frontier and Obata Brewery to successfully complete this project.

The 10 kW system is installed in the emptied swimming pool of the former school and will provide 20% of the energy needed to power the brewery. “Gakko Gura” went on sale on November 3 and is already picking up a strong reputation for its deep cask-infused flavour.

Atsuhiko Hirano, CEO of Solar Frontier, said Obata Brewery’s vision to give a second life to a closed school and turn it into a brand that can be sent out into the world is admirable.

“This is a model initiative for local governments everywhere to build a low carbon society. We at Solar Frontier are proud that our CIS thin-film modules have been used for such an iconic model initiative,” he said.

Management at Manz have expressed that a potential sale of its first turnkey ‘CIGS fab’ may be in the cards in the short-term. The sale would give a much needed boost to its solar division’s revenues.

Sales for the solar part of the business did see a jump at €9.3m in the first nine months of 2014, it was reported, compared to €7.5m in the prior year period.

In its latest financial report, the high-tech manufacturing equipment firm, reported record revenue for the first nine months of 2014, which was derived predominately from its Flat Panel Display segment, which generated €179.9m (US$224.2m) from a total revenue of €250.9m.

The payments of €4.5m from Wurth through its transfer of its CIGS thin-film technology have ended, spurring management to look at new ways to boost revenues, one of which is the sale of the its first turnkey ‘CIGS fab’.

By having taken over the CIGS innovation line from Würth Solar GmbH & Co. KG, Manz is not only the sole supplier able to offer an integrated and fully-productive production line for CIGS thin-film modules that can be operated economically, but also the only supplier worldwide that has a team of 118 CIGS experts at its disposal.

Manz offers CIGS production lines for thin-film modules with the highest degree of efficiency at 14.6 percent (aperture efficiency of 15.9 percent).

“Manz's CIGSfab solution makes the cost of solar power similar to that of electricity from traditional fossil-fuel power plants and significantly cheaper than electricity from offshore wind farms,” said the company.

The production line is available with output from 40MWp to 500MWp, and can be expanded readily as demand grows.

Malaysia could be strong candidate for Trina PV plant

Trina Solar will soon announce the commissioning of its first PV manufacturing plant outside of its native China, with Malaysia being a strong candidate in South East Asia.

In the recent Trina third quarter earnings conference call it was shared that the company has been  negotiating with an unidentified third party strategic partner to establish a joint venture manufacturing operation in South East Asia. Trina Solar has had office operations in Malaysia, according to former company reports.

Malaysia, which has been home to several PV manufacturing facilities and overseas companies, is a likely candidate given certain factors including a pre-existing solar supply chain, a multi-lingual population that includes English, Chinese, Bahasa and Tamil, and reasonable salary costs.

According to Solar System Malaysia, solar companies in the country have included First Solar; Q-Cells; AU Optronics and SunPower, to name a few.

IRM Group Bhd., which has acquired IRM Solar Sdn. Bhd., also ventured into renewable energy industry. The company was granted the FiT Approval by SEDA Malaysia to generate 4MW of electric power, which was scheduled to start in August 2013 (for a 16-year period).

The Bosch Group also had operations in Malaysia in recent years, but has since ended its business activities in crystalline photovoltaics, and where renewable energy is concerned is now focusing on solar thermal energy, heat pumps, CHP solutions, cogeneration, innovative power storage technology, and solar inverters.

Another former player in Malaysia was the former San Jose based solar company, Twin Creeks, which also invested in the construction of high-power solar cell plant in the country, particularly in Ipoh, at the Kanthan Industrial Area. The project had a reported price tag of about RM1 billion, and was built by Twin Creeks Malaysia Sdn. Bhd., generating around 100MW of electricity; after which, power production was due to be increased to 500MW by year 2014. However, the company came into difficulty and was acquired in 2012 by GT Advanced Technologies.

The factory equipment developer acquired Twin Creek Technologies’ thin wafer technology, called Hyperion, and a portfolio of patents for $10m from Twin Creeks’ lenders. GT also agreed to pay royalties that will be based on how well it can sell the thin wafer equipment. GT at the time planned to bring the Hyperion technology to market in late 2014.

Now, GT Advanced Technologies Inc. and its subsidiaries are filing for bankruptcy court protection Under Chapter 11 in the US.

The company said in a statement that it expects to continue "business as usual" with approximately $85m of cash on the Balance Sheet and plans to obtain debtor-in-possession financing.

Twin Creeks launched Hyperion in 2011. The business was founded in 2008 and had raised $93m from investors including Crosslink Capital, Benchmark Capital, Artis Capital Management and DAG Ventures. But without Twin Creeks and Bosch Solar Energy in Malaysia, there leaves a gap in the Malaysian PV manufacturing sector to be filled by another player, which could soon be Trina Solar.