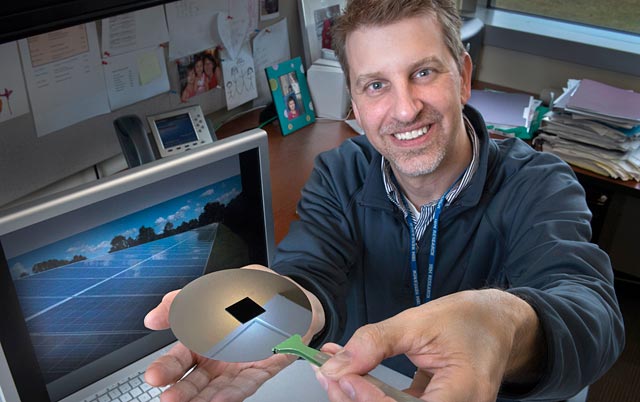 Chuck Black of the Center for Functional Nanomaterials displays a nanotextured...

Scientists at the U.S. Department of Energy's Brookhaven National Laboratory have developed a method of etching a nanoscale texture onto the silicon solar cells to create an antireflective surface that works as well as state-of-the-art thin-film multilayer coatings.

Their method, described in the journal Nature Communications and submitted for patent protection, could if commercialised, streamline silicon solar cell production and reduce manufacturing costs. The approach may find additional applications in reducing glare from windows, providing radar camouflage for military equipment, and increasing the brightness of light-emitting diodes.

"For antireflection applications, the idea is to prevent light or radio waves from bouncing at interfaces between materials," said physicist Charles Black, who led the research at Brookhaven Lab's Center for Functional Nanomaterials.

Adding a coating with an intermediate refractive index at the interface eases the transition between materials and reduces the reflection, Black explained.

"The issue with using such coatings for solar cells," he said, "is that we'd prefer to fully capture every color of the light spectrum within the device, and we'd like to capture the light irrespective of the direction it comes from. But each color of light couples best with a different antireflection coating, and each coating is optimized for light coming from a particular direction. So you deal with these issues by using multiple antireflection layers. We were interested in looking for a better way."

K-Space Associates, a thin-film metrology tools maker to the photovoltaic industry, has said that there is a need for improved in-line, real-time metrology during solar panel production.

Building on their presence in the crystalline III-V multi-junction solar cell market, k-Space said that it has over 100 tools in operation in commercial in-line photovoltaics production facilities around the world. These in-line tools are monitoring both process and material quality parameters and providing real-time feedback for process control.

Its PV metrology tools are tailored to measure the unique material properties and production processes of thin film solar technologies, such as CdTe and CIGS. Absorption edge, film thickness, panel temperature, surface roughness, and absolute spectral reflectance during solar panel production are some of the parameters monitored.

“By measuring and storing data for each panel during production, our customers are not only able to make real-time adjustments to their process, but they also have access to data that can enable further product and process development,” said Barlett.

Greg DeMaggio, product development engineer for k-Space, said, “My experience in photovoltaic production over the past 20 years has shown that inserting in-line metrology and diagnostics tools has been the most effective means of improving efficiency and yield. Optimization of process requires fast, reliable feedback.”

First Solar has launched a new product that allows developers and investors to evaluate the feasibility and energy output of ground-mounted utility-scale projects.

The Energy Capacity Assessment Tool, as it is branded, will enable users to plot potential sites on a mapping interface; design a plant, while adjusting configurations to maximize energy output; and generate a report that includes site-specific estimated capacity and energy yield, while factoring in irradiation levels, average temperatures, project construction timing and more. The application can be accessed via First Solar’s web site.

As more countries open up to solar projects, the tool will be especially marketed in the Middle East.

Ahmed S. Nada, Vice President for the Middle East at First Solar, said that the Middle East is fast evolving into a sophisticated market for solar energy, driven by long term diversification and energy security strategies.

It is in this context that we've focused our efforts on building on our track record and optimizing energy output for the region's unique environmental conditions," said "Showcasing our industry-leading range of solutions at the region's premier sustainable energy exhibition underscores the market's importance to our growth strategy."

A consortium led by Saudi Arabia’s ACWA Power, a water and power developer, and TSK, the Spanish engineering and construction company as technology provider, will construct a 200MW solar project in Saudi Arabia.

ACWA Power and TSK, will construct a 200MW solar project in Saudi Arabia.

According to Dubai Electricity and Water Authority (DEWA) the consortium was the first rank bidder to develop, construct, own and operate the solar photovoltaic independent power project of a net power capacity of 200 MW (260MWp installed).

The winning bid has set a new global benchmark as it reduces the cost of electricity produced by solar energy by over 20 per cent. ACWA Power will receive a levelized tariff of 5.84 USD cents/kWh for a 25-year power purchase agreement (PPA) starting in 2017.

The 200MW facility is the largest utility scale solar plant in the world competitively tendered in a single phase, and the first and largest in the Middle East.

Paddy Padmanathan, president and CEO, ACWA Power, said: “Dubai has a clear strategy to diversify its energy mix with renewable energy, and specifically solar, playing a key role. This when combined with a politically stable environment and the availability of low-cost finance means that solar PV technology becomes commercially cost-effective.

The tariff, which was achieved by using Firstsolar’s  thin film PV panels, secured the project for ACWA Power who will finance and construct the power plant, and then receive the fixed tariff under the 25-year PPA. DEWA will take a 51 per cent equity stake in the project and the developer will take 49 percent (ACWA Power and TSK in the proportion of 85/15).

With enough modules installed worldwide to circle the planet three-and-a-half times, First Solar's 10GW of installed capacity produces an estimated 14,000 gigawatt hours (GWh) a year. This is equivalent to the annual energy consumption of the city of Washington, D.C. It is also sufficient to power five million average households and displaces the need for as many as 20 average coal-powered plants.

Founded in 1999, First Solar made its first commercial shipment in 2002, and since then its advanced thin film modules have been used in a wide range of applications, from kilowatt-scale mini-grid and rooftop applications, to multi-megawatt utility scale solar energy plants.

"This is much more than just a celebration of First Solar's track record and the trust that our customers have placed in our technology. This milestone is a clear indication that solar is no longer a subsidy-driven extra; it has evolved into a valued component of the global generation portfolio, able to hold its own in terms of cost competitiveness and energy yield," said James Hughes, Chief Executive Officer, First Solar, Inc.