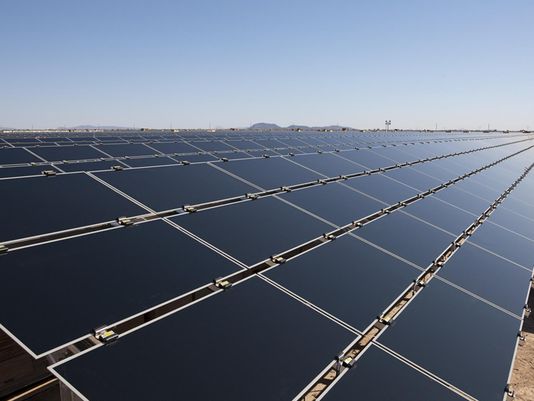 First Solar has reported that iPad maker Apple has committed $848m for clean energy from First Solar's California Flats Solar Project in Monterey County, California. Apple will receive electricity from 130MWAC of the solar project under a 25-year power purchase agreement (PPA), the largest agreement in the industry to provide clean energy to a commercial end user.

"Apple is leading the way in addressing climate change by showing how large companies can serve their operations with 100 per cent clean, renewable energy," said Joe Kishkill, Chief Commercial Officer for First Solar. "Apple's commitment was instrumental in making this project possible and will significantly increase the supply of solar power in California. Over time, the renewable energy from California Flats will provide cost savings over alternative sources of energy as well as substantially lower environmental impact."

The 2,900-acre California Flats Solar Project occupies 3 percent of a property owned by Hearst Corporation. Construction is expected to begin in mid-2015, and to be completed by the end of 2016. The output of the remaining 150MW of the project will be sold to Pacific Gas & Electric under a separate long-term PPA, and the project is fully subscribed between the Apple and PG&E PPAs.

Ascent Solar Technologies, a developer of flexible thin-film photovoltaic modules, integrated into the Company’s EnerPlex™ series of consumer products, has posted fourth quarter revenue of $2.4M, a 118% increase from the previous quarter of $1.1m and an approximately four-fold increase over Q4 2013 revenue of $0.6M.

“$5m of annual revenue is a significant milestone for Ascent Solar and is the first year in the Company’s history to have reported such robust results,” said Victor Lee, President and CEO of Ascent.

“The strong revenue growth again validates our revised strategy that began in the second half of 2012. We are extremely encouraged by the rapid growth of EnerPlex and we expect to see sales continue to grow rapidly as we continue to expand our distribution channels domestically and internationally. In Q4 we also experienced growing acceptance in our focused high-value PV market, which we believe will add to our top-line growth in 2015.”

Russian thin film module maker Hevel Solar is making a $321m commitment to a new facility. The facility has started commercial operations, according to news reports.

Founded in 2009, the company already has a 130 MW production facility based on new-gen process equipment manufactured by Oerlikon Solar, which is located in Novocheboksarsk, which is 500 km from Moscow.

The company has its own R&D centre in cooperation with Ioffe Physical-Technical Institute of the Russian Academy of Sciences (St. Petersburg), which was set up in 2010.

The modules produced at the plant will marketed to people in remote areas, it was reported.
Hevel operates as a joint venture between local asset management group Renova and nanotechnology firm Rusnano Corp.

The thin film specialist is looking to build 500 MW of large-scale PV in Russia by 2020.

In 2014, the company inaugurated a 5MW pilot PV power plant in the Altai Republic, in southern Siberia. The Kosh-Agach project is said to be Russia’s largest PV installation to date and the first source of locally generated power in the Altai region, which had previously relied on power generated in other parts of the country.

Andrei Tsygulev, deputy head of the Kosh-Agach District for construction and architecture, told local news agency ITAR-TASS, said: "The entire Kosh-Agach District consumes from 2.7 to 3.5MW of power, that is, the power station will generate almost twice as much power as our requirements are, and the surplus will be sold to other areas of the region.”

The plant cost RUB570m (US$15.3m) to build and is the first of five PV projects with a combined generation capacity of 45MW planned in Altai.

Attending the Kosh-Agach inauguration ceremony, Russian president Vladimir Putin said the other plants would be commissioned before 2019 at a cost of RUB5bn (US$134.8m).

"India has a critical need to add capacity to its grid as it continues to experience strong economic growth and growing demand for energy," said Pashupathy Gopalan, president of SunEdison Asia-Pacific.

The Rajasthan government recently entered into a memorandum of understanding (MOU) with Sun Edison India and Infrastructure Leasing & Financial Services for establishing a solar park with a generation capacity of 5,000 MW.

India wants to raise its energy mix from renewables to 15 percent, from the current six percent in a period of 10-12 years, Power and New and Renewable Energy Minister Piyush Goyal told the conference.

In other news in India, SunEdison and Omnigrid Micropower Company, the first power company to make electricity provision in rural India commercially viable, have signed a framework agreement to develop 5,000 rural projects, representing 250 megawatts (MW) of electricity, throughout India over the next three to five years.

Solar Frontier has begun construction of a megasolar plant that uses mountings made from lumber, which is not the norm in Japan, the company reported. The plant is scheduled to begin generating power in May 2015.

High resistance to salt air damage and low thermal conductivity were important factors in choosing wooden mountings for this project. These characteristics will result in less damage from salt air in coastal areas and the effects of snow melting agents.

The wooden mountings also offer better resistance to the effects of heat under strong sun conditions. In addition, once the domestically sourced lumber has been dismantled at the end of its life, it can be used to power woody biomass power plants, thereby reducing the project’s environmental impact.

The project in the Yatsushiro region of Kumamoto Prefecture is being undertaken by SF Solar Power, a company jointly founded by Solar Frontier and the Development Bank of Japan (DBJ). The plant will leverage knowhow about wooden mountings from Xyence, the leaseholder and a specialist in wood preservation technology. The wooden mountings, made of Japanese timber, will comprise about 20% of all the mountings at the power plant facility.

The project will use Solar Frontier’s CIS thin-film solar modules.