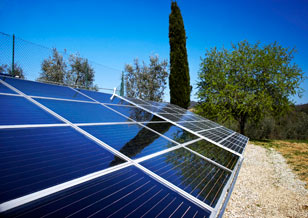 Enel Green Power has completed two new photovoltaic plants in Chile, Lalackama and Chañares, that are now linked to the grid and the company has brought the final 4 MW of Diego de Almagro online.

The solar parks, located in the regions of Antofagasta and Atacama, with an overall installed capacity of 136 MW, required a total investment of $US240m.

Lalackama, with an installed capacity of 60 MW, is Enel Green Power’s largest photovoltaic plant, capable of generating up to 160 GWh a year, equivalent to the consumption needs of about 90,000 Chilean households, thus avoiding the emission into the atmosphere of over 100,000 tonnes of CO2. Building the solar park required an investment of some 110 million US dollars.

The Chañares plant, next door to the Diego de Almagro solar park, with an installed capacity of 40 MW is capable of generating up to 94 GWh a year, equivalent to the consumption needs of about 53,000 Chilean households, thus avoiding the emission into the atmosphere of over 59,000 tonnes of CO2. Building the new solar park required an investment of some 70 million US dollars.

By bringing online the final 4 MW, the Diego de Almagro plant is now fully operational, said the company. It has a total installed capacity of 36 MW and consists of about 225,000 thin-film modules manufactured in the Enel Green Power factory in Catania, Sicily. The solar park is capable of generating up to 80 GWh a year. Building the solar park required an investment of close to $US60m.

These projects are accompanied by long-term contracts for the sale of the electric power generated and delivered to the central Chile regional grid (SIC, Central Interconnected System).

According to Hong Kong-based Hanergy Thin Film Power Group, the plant in Changde will be able to make 300MW of copper indium gallium selenide solar panels a year. Completion is expected in June 2016 according to news reports.

Companies that Hanergy has acquired include US-based  Global Solar Energy, Miasole and Alta Devices and the Solibro unit of Germany’s Q-Cells.

Solar-Tectic has reported that the United States Patent and Trademark Office (USPTO) has issued a patent for its technology that allow the growth of single crystal semiconductor films on inexpensive substrates, such as glass.

The technology was invented by the late Dr. Praveen Chaudhari, winner of the 1995 US Medal of Technology and Innovation, and has applications in various industries in addition to solar, such as displays and LEDs.

The technology can be applied using a variety of semiconductor materials such as silicon and germanium.  The inexpensive, low temperature deposition process, involving eutectic alloys, is extremely well suited for large-scale industrial applications and can be carried out using either the common electron-beam (e-beam) method or a laser.  The latter approach means that film deposition can take place out of vacuum.

The patent is jointly owned with Dartmouth College, New Hampshire.

Solar-Tectic is a member of iClean, a group of companies located at the College of Nanoscale Science and Engineering at SUNY Polytechnic Institute in Albany, New York.

The development and technology team of Calyxo GmbH at the Solar Valley in Bitterfeld-Wolfen reached >14.3% efficiency aperture area (97 Wp 0.72 m²; 13,5% full size area), with a new product generation which will be introduced in 2015.

"It's a great achievement to concurrently both ramp-up a new production line and use it to meet the targeted performance goals for the new product development,” said Michael Bauer, CTO / COO.

“We believe that we can achieve over 15% efficiency with the new product generation. We are convinced that the unique Calyxo deposition process, in addition to its cost advantages, has the potential for the highest semiconductor layer qualities," said Bauer.

At temperatures above 25°C, Calyxo modules are claimed to produce up to 10% more energy than comparable C-Si solar modules due to their lower temperature coefficient. The transition of development concepts into mass production is scheduled for the beginning of 2015 and is being designated under the new module product name CX4.

The US Department of Commerce has reached affirmative final antidumping determinations relating to Certain Crystalline Silicon Photovoltaic Products from the People's Republic of China and Taiwan.  The DOC also reached an affirmative final countervailing duty determination regarding the same product from China, it has been reported.

The ITC is scheduled to make its final injury determinations on or about January 29, 2015.

In a news report, it said that if the ITC makes affirmative final determinations that imports of certain crystalline silicon photovoltaic products from China and/or Taiwan materially injure, or threaten material injury to, the domestic industry, DOC will issue antidumping and countervailing duty orders, as applicable. If the ITC makes negative determinations of injury, the investigations will be terminated.

Finally, countervailing duty rates were applied to China. First, Changzhou Trina Solar Energy Co., Ltd., which includes Trina Solar (Changzhou) Science & Technology Co., Ltd., was given a rate of 49.79%. Second, Wuxi Suntech Power Co., Ltd. and five of its affiliates, were given rates of 27.64%. The "China-wide" rate for all other companies is 38.72%.

According to a report by Silicon Valley Disposition an online auction of the majority of the physical assets from the former HelioVolt solar manufacturing facility located in Austin, Texas will take place.

The auction will include late model research and development, production, and facility support equipment and will begin on January 14, 2015.