Alongside grid-scale power generation, thin film is being used for a growing range of portable power applications… where it has a clear advantage. 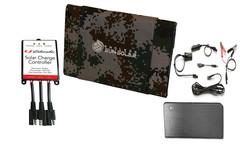 “Demand is increasing steadily as more people are made aware this type of...

The future of thin film could be in your hands… or on them. Because mobile phone casings and even prosthetic limbs are among a raft of new portable power applications where thin film is proving its worth and where it has a significant edge over crystalline-silicon (c-Si) technology.

“Demand is increasing steadily as more people are made aware this type of technology exists, and as more applications are being discovered daily,” says Luke Zimmerman of Indianapolis-based Endless Sun Solar, which sells a range of solar-powered accessories and chargers.

“We would have never thought that we would have customers use our panels for powered prosthetic limbs or thermal imaging scopes, for example.”

One of the biggest customers to date for portable thin-film applications has been the US military, which was already using solar power across more than 350 projects in 2012.

“The military has taken an interest in portable solar chargers due to their light weight, rugged nature and shade tolerance,” comments Zimmerman. “Soldiers carry a quite a few pounds of batteries for each day in the field, and over a week-long patrol the weight adds up.”

An added plus for combat situations is that, unlike a battery, a solar charger will carry on working after it has been run over by a vehicle or pierced by a bullet. More recently, though, other sectors have also begun to wake up to the benefits of portable solar power.

Typical customers fall into three broad categories, Zimmerman says. The first, which includes the military, is of people who need portable power supplies for work, such as federal agency or resource exploration company employees. Here solar is often used to power communications.

Another group is of people interested in emergency preparedness. “This field sees interest in our mid-upper range solar chargers, for charging batteries to run small appliances, portable electronics and varying types of radios,” says Zimmerman.

Finally, there is growing demand from outdoor enthusiasts such as campers, backpackers, hunters, boaters and recreational vehicle fans, who use solar chargers for electronic equipments such as global positioning satellite units and laptops.

Beyond these niche, but growing applications, manufacturers from a number of sectors are increasingly looking to incorporate solar power into a wide range of products, from consumer electronics to vehicles.

It is important to note that many of these applications are being targeted by c-Si manufacturers as well.

“Everyone is becoming more dependent on their devices, not less,” says Jeff Crystal, chief operating officer. “Demand is going up as more people understand that solar is a viable option to keep their devices charged.

“A lot of small solar panels are either hobby-grade or very bulky. We provide lightweight, high-quality panels that can be used for industrial applications. If your application needs between 2 and 17 Watts, our panels are pretty good contenders.”

Nevertheless, it is clear that the flexibility and spectral response of thin film makes it particularly suited to portable applications. And among thin-film technologies, copper indium gallium selenide (CIGS) appears to offer the greatest potential.

“Every ounce counts when a customer will be carrying the solar charger on their back, so this is a big selling point for us. Equally important is the shade tolerance that CIGS PV has, and how it absorbs a significantly larger portion of the light spectrum than traditional PV.”

Currently, he notes, amorphous silicon and organic PV appear to be the only other two thin-film variants being used for portable applications. But they are generally less efficient than CIGS and thus require a larger surface area for the same power.

What is clear, nevertheless, is that the opportunity for solar energy is growing generally in portable applications.

In recent weeks the solar industry saw the launch of a solar mobile phone charger called Spor, on the back of a target-beating Kickstarter campaign, and SOL, a solar-powered laptop developed by WeWi Telecommunications of Canada, which retails for around CAD$500.