IKEA and the thin film giant Hanergy have partnered in a novel solar rooftop marketing approach, making solar available as a consumer product in the familiar and cheerful setting of IKEA stores in several European countries. Switzerland is now its next partner solar market. 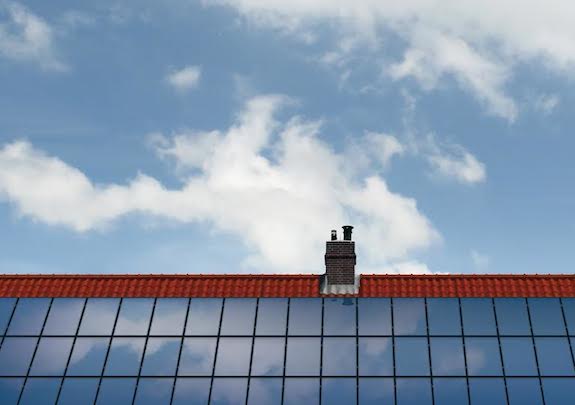 At a time when the world dismissed thin film as the loser in the PV price wars...

With its positive image reinforcing the concept of frugal chic sustainability, IKEA would seem to be the ideal storefront partner for rolling out rooftop PV - and Switzerland must be the picture perfect spot for a rollout of IKEA-branded solar.

“We are proud to be the third country to be able to offer affordable solar panels to our customers, helping to bring solar energy to the many,” says IKEA Switzerland Sustainability Manager Lorenz Isler. “We want to enable our customers to live a more sustainable life at home in an affordable way.”

Hanergy and IKEA had piloted the scheme in the UK in 2013, and just launched in the Netherlands in October.Hanergy Solar UK, the subsidiary of Hanergy Thin Film Power Group Limited will apply lessons learned in the first launch in the UK, in its new Swiss launch.

Thankfully the roll-out has gone very successfully. Probably our biggest challenge was recruiting and training so many people in a short space of time. We now know how to do this very well, which will definitely be an asset with future roll outs,” says Toby Ferenczi, CEO at Hanergy Solar UK.

As of December 15th, IKEA shoppers in Spreitenbach, Switzerland were able to shop for their own solar power in the same store where they might purchase a new kitchen - and for a similar kind of price.

“We are aiming to make solar panels an everyday part of the home,” Ferenczi explains. “We are now selling solar panels in a similar way to how IKEA sells bedrooms, bathrooms and kitchens, which is an important step towards making solar mainstream. We provide a trained Solar Advisor in store, who can speak directly with every customer, which is very reassuring.”

According to market research commissioned by Hanergy, 62 per cent of Swiss consumers said they would go solar if the costs were ‘better value’.

IKEA already has an expressed company mission to create “a better everyday life for the many people”. And the Swiss roll-out actually does go a long way towards providing exactly that sort of affordability for IKEA customers.

The average capacity of a Hanergy Solar System for Swiss IKEA customers, aimed at covering about 64% of electricity use, would be around 4kW, or almost twice as much capacity as the 2.5 kW systems representing the average in UK sales of 1,800 to date.

But Ferenczi points out, this is not a set size, but merely the averages chosen by consumers. “Each fitting is bespoke, and a larger system can supply an even higher percentage of your electricity. We use the average system as an indication of a representative example.”

For a 4kW system Swiss customers would pay the equivalent of something in the neighbourhood of about US$5,000 after incentives, about a quarter of the going rate for a 4 kW system in many countries.

“We offer solar financing of up to 15 years so that the income from the solar panels is greater than the repayments over a typical year, and our finance rates are very competitive for this length of loan period,” he asserts.

Tariffs have an effect on consumer behaviour.

“Most of our customers tend to want to install as many solar panels as they can fit on their roof to maximise their return on investment,” he says. “Solar is an attractive financial proposition in all three countries. The UK has a Feed-in Tariff, the Netherlands has net metering and Switzerland has a grant system (one-off payment).”

Swiss customers will have to act fast to take advantage of current incentive levels, expected to generate an estimated total of about $19,000 over the project lifetime.

The Feed-in Tariffs are set to reduce beginning in 2015, in a stepped process somewhat similar to the gradual and predictable reductions in the California Solar Initiative (CSI) utility rebates; designed to spur quick adoption “while prices last!”.

In October of 2015, there was a planned cut of 23% in the Feed-in tariff for systems under 30 kW, which then steps down further in April of the following year.

Switzerland to date has 1 GW of solar installed, covering 1.5% of total electricity demand. Very cheap and zero carbon hydro power has long made up a large part of the national electricity mix, which has diluted an environmental motivation to go solar, unlike the UK and Netherlands.

“Switzerland is a much less mature market where solar is less well known,” Ferenczi concedes. “The UK and Netherlands have similar levels of awareness.”

While the locations of the next eight planned country launches are unknown for now, one factory is in Europe, and more are in the US.

For the three European countries, Hanergy will access panels made in its Solibro factory in Germany. An attractive solid black with no rims to spoil the appearance - or gradually build-up leaf debris in its frames, the panels are an aesthetic match for the IKEA image of chic and sophisticated sustainability.

The panels are covered by an industry-standard 25-year performance warranty, guaranteeing a minimum of 80% of rated capacity after 25 years, while home monitoring capability enables consumers to check out their system’s electricity generation in real time on their laptop or smartphone.

At a time when the world dismissed thin film as the loser in the PV price wars, Hanergy swooped up three thin film manufacturers, with a combined investment of $4.3bn. With Germany’s Solibro, California’s MiaSolé and Arizona’s Global Solar Energy turning out panels in their factories for the company, it can now legitimately claim to be the world's largest thin film manufacturer.

Hanergy Thin Film Power Group made a very big bet in 2009 on thin film that now, along with Solar Frontier and First Solar, positions the firm in a global leadership position - in production.

And in the IKEA partnership, the other side of that business plan - the consumption side - appears to be taking hold.

And in yet another vote of confidence in thin film, Hanergy bought Alta Devices whose solar cells recently surpassed 30% efficiency. "Hanergy plans to actively expand the application of Alta Devices' products in various mobile power application areas, ranging from emergency charging of mobile phones, to the automotive sector and the Internet of Things," noted the company’s statement.