Saudi Arabia's renewable energy plan has taken a different shape, with around 6 GW of solar PV capacity now proposed over the next 10 years. We speak with industry experts to find which PV technologies are anticipated to make it in this promising market. 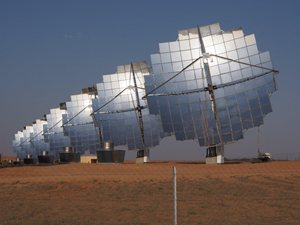 The Saudi solar market has been all but quiet. Last month, Ziyad Alshiha, CEO of Saudi Electric Company (SEC), has reported a plan to spend SAR 80-100 billion (US$21-27bn) over the next 10 years to add 9-11 GW of renewable energy capacity, including 6 GW of PV and 1 GW of CSP.

The plan was announced during an event held by the Saudi Arabia Solar Industry Organization in Riyadh, where SEC said it wants to kick-start the scheme as soon as possible.

Taqnia has also recently invited proposals for the EPC of 6 MW of CPV projects. As reported by PV Insider, the 6 MW will comprise a 5 MW plant in Tai'f city, southwest of Riyadh, and a 1 MW CPV plant near the Solar Village, home to the world's first CPV installation that was built in 1983.

Taqnia has so far demonstrated serious interest in solar power. Earlier this year, it purchased 50% of ACWA Holding’s solar subsidiary and EPC contractor Sun & Life, and in the summer, it went to acquire American CPV manufacturer Solar Junction, whose triple junction cells will solely be used across the planned 6 MW projects.

The government-owned firm intends to develop, construct, and operate CPV solar plants in the Kingdom. It would like to determine which CPV systems are most suitable for use with Solar Junction cells to achieve best project economics.

"CPV systems are expected to be a major part of the energy mix of Saudi Arabia. This is due to the high direct normal irradiance (DNI) found in the western part of the Kingdom and because CPV is well suited for the local manufacturing of a large percentage of the system’s components," read Taqnia's Request for Budgetary Proposal.

In fact, plans for building a local manufacturing base in Saudi Arabia is a key metric for K.A.CARE, which commissioned a study to investigate the localization of components of various technologies. The study concluded that CPV can have the vast majority of the components manufactured locally.

K.A.CARE's findings on localization add to the technical potential of CPV in the Kingdom. "Harsh environmental conditions of high temperature, dust accumulation and lack of rainwater to wash the modules and sandstorms in Saudi Arabia act together to reduce the efficiency of almost all PV systems," said a Saudi PV technology expert who preferred not to be named.

"However, numerous studies have shown that mono-crystalline silicon and CPV are the most resilient under these conditions."

Some performance issues with CPV remain unsolved. For example, there is insufficient evidence showing that CPVs can withstand prolonged operation under high temperatures without module failure or junction breaking.

"CPV [as a technology] enjoys the advantage of higher efficiency at higher temperatures, but the technology is still not economically competitive compared to mono-crystalline silicon", the source said, adding that CPV modules are also more susceptible to erosion by sandstorms because of the use of plastic optical components.

Jigar Shah, founder and former CEO of SunEdison and partner in Clean Feet Investors, highlights that "flat-plate solar, whether thin film or crystalline, will be better for Saudi Arabia than CPV because of the savings in operations and maintenance."

Meanwhile, Sabri Asfour, general manager of Fas Energy, a subsidiary of Saudi Arabia's Fawaz Alhokair Group and a company that has 2,400 MW of GCC-based solar projects in the pipeline, remarks that any technology to be used in the Kingdom should consider the temperature, dust, efficiency, and humidity.

"Based on experiments made on different technologies, the below results were found. Therefore, we see thin film as the best, but the weakness lies in temperature coefficient," he says.

Clearly, opinions still differ over the ideal solar technology for Saudi Arabia. Tamer Shahin, solar technology engineer at King Abdullah University of Science and Technology (KAUST), sums it up by saying: "there is no 'best' technology".

"There could be a technology that is best suited for a certain application," he says. "For example, the historical debate between CSP and PV-based technologies, which might be clearer in other economies, is not yet clear in Saudi Arabia as it is still a growing market that has yet to take shape."

Shahin is responsible for the test-site management, maintenance, and experimental procedures at KAUST's New Energy Oasis, an indoor-outdoor platform for testing and demonstrating renewable energy technologies under Saudi desert conditions, which largely comprises ofPV manufacturers at the moment.

"If you zoom in further on the PV arena, you will also find the same over-arching discussion of which PV technology is best. For this we say that each technology has its right application," explains Shahin.

"For a certain project, one PV technology may make more sense than the other. You cannot, for example, compare rooftop installations with ground-mounted systems; utility-scale versus small-scale; or commercial versus residential."

Is the market ready?

The main question now is whether the Kingdom is ready to move forward with projects. By looking at the current state of the market, it is clearly in a preparatory phase of testing technologies, monitoring demonstration plants and gathering data on the results.

This has of course been going on for a while, but has intensified over the last year. For instance, Saudi Arabia's Knowledge Industry Co. is developing a pilot project that will generate 300kWh a day and will employ PV, CPV, CSP, and wind turbines to assess which technologies should be scaled up in the country.

Known as Renewable TaQati, the project is being built in the Riyadh Techno Valley at King Saud University, where various technologies have been brought in to experiment on and adapt to the desert environment. Moreover, all completed PV and CPV plants have been intentionally built small-scale, to allow for observation before larger projects can be rolled out.

While some might argue that the Competitive Procurement Process(CPP)White Paper came out too early, the documentdid specifythat it was a proposed CPP. On its cover page, the White Paper said: "Discussions of Saudi policies are purely hypothetical, as such policies are subject to change".

With this in mind, it did not come as a surprise to hear of the latest revisions to the planned renewable energy mix. And while the global industry may be relieved to hear an announcement of some kind, the sudden change of heart may not positively reflect on the market.

"Foreign companies started looking heavily into the Middle East in 2007-2008 because of the leadership of Saudi Arabia. Today, most foreign companies are simply confused about the market. They see the market potential but have no idea if there is a straightforward market opportunity that they can access," highlights Shah, who is also thechief executive of the Carbon War Room.

Confusion has even led to frustration. An industry insider who spoke on the condition of anonymity said that the Saudi market has been "a major source of disappointment to the PV industry".

"It never lived up to expectations of international companies. I believe that international companies are turning away from the Saudi market to more promising and growing markets around the globe that started considering PV much later than Saudi Arabia, but still managed to deploy large-scale, successful installation programmes," he suggests.

Having said that,he adds that everyone believes in the huge potential of PV in the Kingdom and in the need to deploy large-scale projects.

"To Saudi Arabia, utilization of renewable energy, in particular PV, is of strategic national interest. I remain hopeful that the decision to move in this direction will take place sooner rather than later."

Shah remains similarly optimistic: "I am confident that by 2020, Saudi Arabia will be a market that exceeds 1,000 MWs per year."