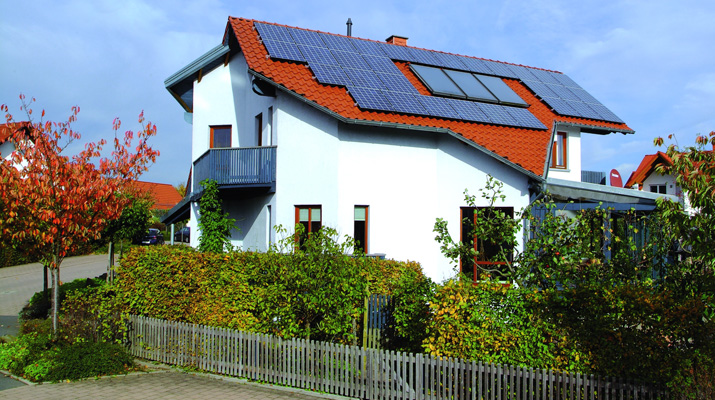 The “PV-KWK” project aims to develop optimized system solutions that create the most effective combination of photovoltaics and CHP plant/heat pump systems, and are suitable for multiple applications in buildings. Another goal is the optimization of load control for electrical appliances and the use of energy storage in pure solar systems through to intelligent incorporation of eMobility.

The collaborative project, which runs until November 2017 and has a budget of approximately €5.5 million, is being coordinated by SMA and sponsored by the Federal Ministry of Education and Research with €3 million, as part of the “Research and Development for Photovoltaics” funding initiative.

The objective is to create a modular system of coordinated energy supply and control components that can be used and combined flexibly for electricity and heat supply in buildings, with interfaces to the energy market and grid management service.

UAE-based power project developer Access Power MEA has won a contract to develop Uganda’s first solar power plant. Through its subsidiary Access Uganda Solar Ltd, the company will build, own and operate a 10 MWp solar PV facility in the town of Soroti in north-eastern Uganda. Once complete, the plant will generate over 18 million KWh per year, providing energy for more than 40,000 Ugandan households.

“We are delighted to have the opportunity to make a significant contribution to thousands of households in Uganda. The GET FiT program is a fine practical example of additionality that accelerates private investment into a sector with high developmental impact,” said chairman of Access Power Reda El Chaar

Following a competitive bidding process during which seven offers were received, Access Power’s proposal was selected to benefit from the GET FiT Solar Facility, a dedicated support scheme for solar PV developments managed by KfW the German Development Bank on behalf of the Ugandan Government and funded by the European Union Infrastructure Trust Fund.

“The tariff for the project over the period of 20 years will be USDc 16.38 per kWh. However, the end users in Uganda will only pay USDc 11 per kWh through the electricity tariff, while the remaining cost will be paid by the GET FiT Solar Facility,” said Stephane Bontemps, managing director of Access Power.

The US$17 million project will be the largest solar Independent Power Project in Sub-Saharan Africa excluding South Africa. It is expected to reach financial close in June 2015 and commence operations by December 2015.

SCHMID Group has received an order from an unnamed Asian premium manufacturer of solar cells and solar modules for the construction of three Multi Busbar Connector (MBC) lines. Instead of the previous standard of three wide ribbons, these systems apply 8 to 15 thin busbar wires, which improve cell efficiency through reduced shadowing.

According to SCHMID Group, their MBC technology allows savings of silver and thus a reduction in material costs, and can interconnect both standard and high-efficiency solar cells - for example, bifacial solar cells.

“The high degree of innovation of the MBC system which was a decisive factor in the purchase of three MBC systems,” SCHMID Group said in a statement. “The positive experience gained with SCHMID products so far convinced the said customer to award another contract to the SCHMID Group.”

The three MBC lines will be delivered by the middle of next year.

Turkey’s energy agency EPDK has awarded the first licenses for the construction of two PV power plants with a combined capacity of 13 MW, PV Magazine reported. Work on the two projects, which were approved last May, can now finally begin. Contracts for another 580 MW of PV capacity are still in progress.

South Korea’s Hanwha Solar Holdings is merging its U.S.-listed PV manufacturing affiliate Hanhwa SolarOne with Hanwha Q Cells Investment Co. in a combined company deal valued at $2 billion including debt. Under the agreement, Hanhwa SolarOne Co. will acquire the Germany-based Hanwha Q Cells for $1.2 billion in stock. The combined business will create the largest manufacturer of solar cells with a capacity of 3.28 GW. The approved transaction is expected to close in the first quarter of 2015.

According to Hanhwa SolarOne, the merger is expected to result in several strategic benefits, including optimized global manufacturing footprint, complementary market positioning, improved R&D, and cost and revenue synergies. Moreover, the combined company will expand into downstream, initially leveraging 2.17 GW global downstream pipeline, including 1.12 GW pipeline under partnership with Hanwha-affiliated companies, of which 30% is in late stage, and Q Cells' more than 700 MW of project installation expertise.

Chinese PV module manufacturer, Wuxi Suntech is expanding its 3% market share in Benelux (Belgium, the Netherlands and Luxembourg) to 13% by 2015 through its newly announced partnerships and projects with Oskomera Solar Power Solutions (OSPS), Solar Green Point and VDH Solar.

Suntech was recently selected to provide the first batch of around 1,500 panels to Dutch solar installer and supplier VDH Solar, who is working with Solar Green Point to construct Solar Park Gruyterfabriek in Den Bosch, southern Netherlands. Solar Park Gruyterfabriek is expected to be one of the larger solar parks in the region when completed by the end of 2014. In addition, two other motorway projects near totalling 6MW of PV will be constructed under a Suntech-VDH Solar partnership.

Suntech has also renewed its partnership with Netherlands-based OSPS – a PV-systems integrator for large-scale projects – providing its technology and products to support OSPS's 175 MW project portfolio.

"Yingli's collaboration with KBank, Huawei and Solventia Solar Energy is designed to accelerate solar power's expansion in Thailand by simplifying PV deployment for power suppliers and consumers," said Angie Koh, managing director of Yingli Singapore. Thailand has established a 3 GW target for solar power capacity by 2021 and plans to meet 20% of its energy demand with renewable resources by 2022.

"Eagle+" modules can also resist potential induced degradation under weather conditions of 85 degrees Celsius and 85% relative humidity for 1,000 hours,” the company said in a statement. JinkoSolar has built a vertically integrated solar product value chain with an integrated annual capacity of around 2 GW each for silicon ingots, wafers and solar cells and around 2.1 GW for solar modules, as of March 31, 2014.

PV module manufacturer Trina Solar has agreed to acquire a 28% stake in Shuntai Leasing Co., one of the financing institutions under Changzhou Hi-Tech Group, with around $50 million registered capital. The company has also signed a cooperation agreement with Shuntai to finance the company's downstream projects and solar manufacturing business by leveraging Shuntai's leasing platform.

Changzhou Hi-tech Group is one of the largest state-owned companies in Changzhou covering a range of businesses including government financing, city development and operation of business enterprises. The group owns several financing institutions and has raised approximately US$5.5 billion in the past years.

“Changzhou Hi-tech Group is our long-term strategic partner with whom we have developed a deep and trusting relationship,” said Jifan Gao, chairman of Trina Solar. “Our future cooperation with Shuntai will enable Trina Solar to expand its financing channels and better support our downstream business as well as our module business.” The share transfer is expected to be completed by the end of this year.

Allianz Global Investors, a unit of the German insurer Allianz SE, have acquired the Italian company Sisen 3 Srl, which manages an 8 MW PV plant in the Southern Italian region of Puglia.  The acquisition was made on behalf of the Allianz Renewable Energy Fund (AREF).

The recent changes in the Italian feed-in tariff system have been reflected in the acquisition negotiations, although the transaction price was not disclosed. “Our investment targets are return-strong projects which already price in regulatory risks like these. This also applies to the Italian photovoltaic market,” said Armin Sandhovel, chief investment officer for infrastructure equity at Allianz Global.

Emcore Corporation, which makes compound semiconductor-based components and subsystems for the fiber-optic and space solar power markets, said that its shareholders have approved the sale of its Space Photovoltaics business to SolAero Technologies Corp., an affiliate of private equity firm Veritas Capital.

The assets being sold – for $150m in cash, subject to working capital adjustments – comprise all of Emcore’s Photovoltaics reporting segment, as well as all rights to the buildings owned, and includes about 275 staff in Emcore’s headquarters in Albuquerque, New Mexico. The Space Photovoltaics business fiscal 2013 revenue was $70.5 million.