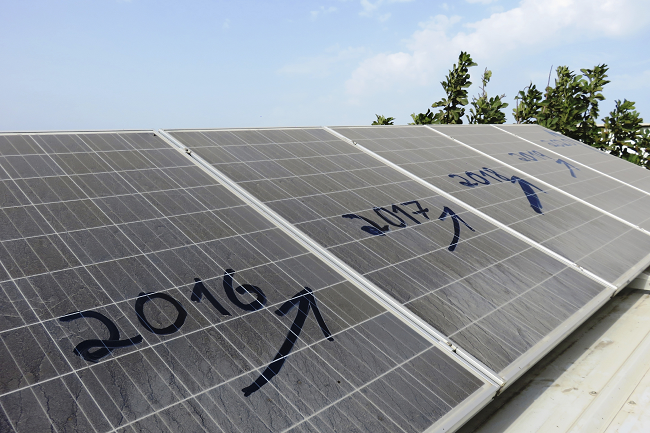 Solar photovoltaic module prices have fallen by around 80% on average since the end of 2009 while electricity costs from large-scale solar PV plants halved between 2010 and 2014, according to IRENA’s Quarterly Update published in October.

The installed costs for utility-scale solar have decreased to a global average of around $0.09/kWh ($90/MWh), meaning that electricity from large-scale PV is beginning to compete with fossil fuel-fired electricity costs in some parts of the world (see graph below).

Levelized cost of electricity from renewable power generation technologies commissioned in 2014. The size of the diameter of the circle represents the size of the project. The center of each circle is the value for the cost of each project on the Y axis. Real weighted average cost of capital is 7.5% in OECD countries and China; 10% in the rest of the world. Source: IRENA Renewable Costing Database.

Brazil’s solar auctions are currently contracting for solar PV at around $0.08/kWh while recent tenders in Jordan resulted in bids in the range of $0.06-0.08/kWh. In the United Arab Emirates, the Dubai Electricity and Water Authority has tendered for the lowest-cost electricity to date, just under $0.06/kWh.

At the same time, SunEdison has just won a bid to sell solar power in India at record-low 4.63 rupees/kWh ($0.0706/kWh), Reuters reported on November 4. The company won an auction for a 500 MW project in the state of Andhra Pradesh.

The previous lowest solar tariff in India was about 5.05 rupees/kWh for Canadian company SkyPower Global's 150 MW PV project in the state of Madhya Pradesh.

Though the SunEdison project could boost the appeal of renewables in India, solar energy still has a long way to go before it can effectively compete with coal on price, which costs between 1.5 and 5 rupees/kWh in India, according to Reuters.

SunEdison said in a press release that the new module – its most efficient to date – is especially suited for home and business applications where space is limited.

The new application is designed to enhance system performance by using wireless communications, optimizing power output and providing real-time monitoring. The module is designed to cut overall maintenance costs by eliminating module-level or cell string mismatch and by reducing the chance of module malfunction.

Increasing power output in constricted installation spaces, the Suntech smart DC module also offers up to 30% longer strings that will balance of system costs, the company said in a press release.

Suntech plans to integrate the TS4 into a variety of its modules that cater to both rooftop and commercial markets in Europe and Australia.

The Czech Parliament has also recently approved an amendment to the country’s renewable energy law that exempts rooftop PV projects up to 10 kW from requiring building approval.

The Czech Republic had 2.1 GW of installed PV capacity at the end of December 2014, according to data from the country’s Energy Regulatory Office.

At the same time, the country installed only 2 MW of solar PV in 2014, according to SolarPower Europe’s Global Market Outlook for Solar Power 2015-2019 report, and was listed in the study as an “investment desert” due to retrospective measures and low political support for solar power that has slashed investment in the once-booming sector.

European solar PV cumulative capacity segmentation by country. About 60% of the Czech Republic’s installed capacity is in the residential sector (systems of up to 10 kWp), followed by around 35% utility-scale capacity (systems above 1,000 kWp and built on the ground), with the rest almost equally distributed between commercial (10-250 kWp) and industrial installations (above 250 kWp). Source: SolarPower Europe 2015.