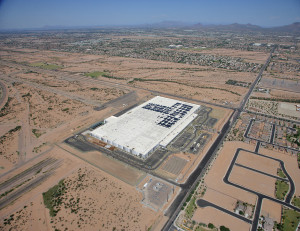 The $113.6m sale of First Solar’s Mesa manufacturing facility to Apple was...

The former First Solar site was initially going to be used to produce sapphire-glass screens through Apple’s $578m GT Advanced Technologies contract signed in 2013. But the plans to use the GT glass never transpired for Apple’s much awaited iPhone 6 mobile phone with GT faling into financial trouble.

The data centre will be constructed over a 1.3 million-square-foot former manufacturing facility previously used by First Solar.

Apple could receive $12.5m in renewable energy tax breaks for its Mesa data centre, according to enter.

According to the Phoenix business Journal, Apple could benefit from $12.5m in renewable energy and power usage tax breaks from Arizona for its planned data centre.

That would be on top of Apple receiving property, data centre, job creation and other tax breaks as well as job training grants from the state for its planned $2bn command centre in the East Valley, said the news report.

Those benefits could be in the millions or tens of million of dollars, according to an official familiar with the situation.

Solar module maker JA Solar Holdings is confident that it will land more deals in the South pacific and nearby Asia markets following positive feedback from clients in 2014.

JA Solar was the module supplier for several national solar projects in New Zealand, Fiji and Papua New Guinea over the past year.

Most of these solar projects are the first in their respective regions, setting a benchmark for the region's solar industry development, says JA Solar.

One example of positive project feedback is the 350KW Auckland Shopping Centre Project, which is currently the single largest solar installation in New Zealand. The project is heralded as a major step in the development of clean energy by the New Zealand government.

The 1 MW Cook Islands Raratonga Airport Project is also the first solar power station in the Cook Islands, helping the airport to reduce diesel consumption by 400,000 litres per year.

Jian Xie, president of JA Solar, added, "As the first projects of their kind in the region, these model projects are of great significance in terms of developing clean and renewable energy, protecting ecological environment, upgrading power supply structure and accelerating the sustainable development of the economy in the region. This breakthrough in the South Pacific region is a new milestone in our effort to expand globally into new markets and reflects our ever-growing global influence."

Duke Energy has acquired a majority interest in REC Solar, a provider of comprehensive commercial solar and energy solutions nationwide.

Duke Energy will invest up to $225m in commercial solar projects developed by REC Solar and supported by long-term power purchase agreements over the next few years. REC Solar serves key sectors including retail, manufacturing, agriculture, technology, government and nonprofits.

Since it started business in 1997, REC Solar has completed more than 400 solar projects, ranging in size from multi-megawatt utility projects to local business rooftop systems. The company has more than 140 MW of distributed solar deployed or under construction.

In other Duke Energy news, a partnership between the US power company and the Department of the Navy and the U.S. Marine Corps will lead to a 13-megawatt (AC) solar facility being built at the Marine Corps Base Camp Lejeune in North Carolina.

The facility will be owned and operated by Duke Energy Progress (DEP) and is expected online in 2015.

Single axis PV tracker manufacturer,NEXTracker, has shipped a supply of single axis trackers to SunEdison, headed to some of Latin America’s largest utility-scale solar projects, totalling 223MW. The trackers were deployed for SunEdison projects in Chile to support 142MW and in Honduras to support 81MW.

“Our experience installing NEXTracker in our projects in Chile and Honduras has been excellent,” said Sasan Aminpour, Vice President of Global Operations for SunEdison.

SunEdison’s engineering teams conducted extensive assessments of NEXTracker’s technology, and concluded that it is a reliable and cost effective platform for the power company’s ground-mounted projects, especially in emerging markets including Chile and Honduras.

Another reason the trackers were chosen were for the unimpeded row design, which also provides valuable cost savings for panel cleaning in the dusty Chilean desert, and minimises site grading requirements, said Shugar.

The Solar Energy Finance Association (SEFA), the only non-government organization solely dedicated to advancing the availability of public capital and expanding financing options for the solar energy industry, has announced new initiatives that will promote solar as a more attractive asset class.

SEFA’s long term goal is to promote solar as an asset class and thereby improve the solar industry’s access to capital, reduce financing costs and increase the footprint of distributed solar power in the United States.

SEFA says to achieve this it will carry forward, promote and administer many of the valuable work products and initiatives developed by the Solar Access to Public Capital (SAPC) working group, a 3-year initiative to increase the availability of capital to the solar industry, funded by the U.S. Department of Energy (DOE) and led by the National Renewable Energy Laboratory (NREL).

“We are eager to embark on a new year as we prepare to offer exciting new opportunities in the solar industry,” says Mary Rottman, president of SEFA.  “SEFA is an organization that supports industry professionals, providing them with the tools necessary to collaborate and collectively pave the way to solving some of the industry’s most complex challenges.”

One area that the membership-based association will promote the use of standardized financing contracts by the solar industry to reduce the time and complexity of evaluating projects, lower transaction costs in the solar development process, and improve transparency to the consumer. Standardization will also allow for the ability to pool the associated cash flows from solar PV assets for sale or securitization in the capital markets, thus increasing the solar industry’s access to lower cost funding sources.

Currently, six standard forms of residential and commercial solar leases and PPA templates are available and are already in use by many solar companies. New standard contract templates are likely to include solar loan and EPC agreements.

Pacific Gas and Electric Company has received permission from state regulators to offer electric customers a new programmeme that will provide up to 100 percent solar power for a modest cost premium each month. PG&E expects to start enrolling customers in the fourth quarter of this year.

PG&E will buy energy for the programme from newly developed small and mid-sized solar projects located within its service area. Participating residential and commercial customers can choose to cover either 50 or 100 percent of their energy use. They will pay the incremental cost of the new solar energy they consume, as well as related programme costs.

The initial estimated premium of two-to-three cents per kilowatt-hour likely will fall over time as solar costs decline relative to the cost of PG&E’s standard power, which is more than 25 per cent renewable today.

Under a separate programme option, customers will be able to contract directly with a third-party developer for a share of the output of a local solar project.

"Our green option will let them buy into a pool of clean solar energy, locally produced in our service area, to meet all of their electricity needs," said Chris Johns, president of PG&E.

The National Renewable Energy Laboratory (NREL) has reported that just a quarter of residential rooftop area is suitable for solar due to structural, shading, or ownership issues.

"Clearly, community options are needed to expand access to solar power for renters, those with shaded roofs, and those who choose not to install a residential system on their home for financial or other reasons," the NREL report stated.