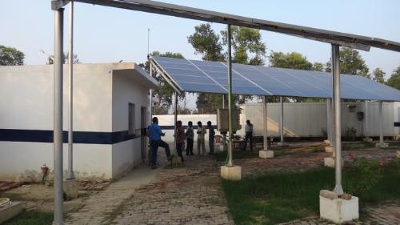 The Rajasthan government recently entered into a memorandum of understanding (...

SunEdison said it would build 15,200 MW of solar and wind power capacity by 2022, while First Solar made a commitment to develop 5,000 MW by 2019 in energy starved India.

"India has a critical need to add capacity to its grid as it continues to experience strong economic growth and growing demand for energy," said Pashupathy Gopalan, president of SunEdison Asia-Pacific.

The Rajasthan government recently entered into a memorandum of understanding (MOU) with Sun Edison India and Infrastructure Leasing & Financial Services for establishing a solar park with a generation capacity of 5,000 MW.

India wants to raise its energy mix from renewables to 15 per cent, from the current six percent in a period of 10-12 years, Power and New and Renewable Energy Minister Piyush Goyal told an audience recently.

In other news in India, SunEdison and Omnigrid Micropower Company, the first power company to make electricity provision in rural India commercially viable, have signed a framework agreement to develop 5,000 rural projects, representing 250 megawatts (MW) of electricity, throughout India over the next three to five years.

The projects were proposed by Tradewind Energy and selected by Southern Company subsidiary Georgia Power in a competitive process through the nationally recognised Georgia Power Advanced Solar Initiative.

The electricity and associated renewable energy credits (RECs) generated by the 80-MW facility will be sold under a 25-year power purchase agreement (PPA) with Georgia Power. Construction of the 80-MW facility is currently scheduled to begin this month.

Georgia Power will purchase the energy generated from the 19-MW project under a 20-year PPA. Southern Power will retain the associated RECs, which it may sell to third parties. Construction of the 19-MW facility is currently scheduled to begin in June.

Both projects, which are expected to enter commercial operation in late 2015, will be constructed on separate sites totalling approximately 950 acres in south Georgia's Decatur County using single-axis tracking technology – optimizing efficiency by directing solar panels to track the sun.

With the development of the Decatur County projects, Southern Power will own approximately 670 MW of renewable energy generating capacity that is either already in operation or under development.

E.ON has sold its Italian solar business to the private infrastructure investment fund manager F2i SGR. F2i has an impressive track record in the solar business in Italy.

The activities sold comprise a total generating capacity of 49MW and consist of seven ground mounted solar plants that were constructed between 2010 and 2013. The solar plants are located in areas with high irradiation and benefit from favorable solar regimes providing stable cash flows in the long-term. About 70 percent of the capacity is installed on Sardinia.

E.ON and F2i SGR agreed not to disclose the purchase price. The transaction was signed and closed on February 19, 2015.

Based in Milan, F2i is a private infrastructure investment fund manager in Italy and one of Europe’s largest. F2i is fully owned by a group of leading financial institutions. In particular, F2i has been active in the photovoltaic sector in Italy since 2009 as founder of Holding Fotovoltaica (HFV), which currently represents one of the Italian market leaders with 89 megawatt under management.

Another phase of a 400MW Texas photovoltaic plant, constructed by a partnership between developer OCI Solar and local utility CPS Energy, has been completed, bringing 5.5MW onto the grid in San Antonio.

Texas module maker Mission Solar has been reported to be supplying the latest phase of the project.

Lockheed Martin has contracted Advanced Roofing and Advanced Green Technologies to design and build a 2.25MW  solar carport at the global security and aerospace company’s Mission Systems and Training facility in Clearwater, Florida.

The project will be the largest private, non-utility owned solar array in Florida and is expected to produce 3.33 million kilowatt hours of electricity per year.

The solar carport will cover 151, 400 square feet of the facility’s parking lot with 7,260 solar modules to provide shade for 534 cars. At completion, the project is expected to cut electricity purchases for the facility by up to 60 per cent, according to the defense technology company’s estimates.

Advanced Roofing, Florida’s largest commercial solar contractor, competed with a field of national and Florida-based firms for the contract. The company will serve as general contractor, with sister firm Advanced Green Technologies providing construction and installation.

“Since the facility’s operations will be in full swing throughout the construction schedule, precise phasing will be crucial to expedite our work and minimize disruption at the site,” said Clint Sockman, vice president of Advanced Roofing and Advanced Green Technologies.

Construction of the fast-tracked, multi-phased project begins this month and will employ more than 40 workers on-site, with completion set for summer 2015. In addition to design, procurement and construction of the solar carport, Advanced Roofing’s contract includes resurfacing the entire 6.65-acre asphalt parking lot at the facility.

Hanwha SolarOne S-series modules will be used for the project. The carport will have a full under-canopy LED lighting system. The first phase will be in use as the second-phase parking lot work commences.

SunEdison has completed the construction of a 677KW ground-mount solar PV system that will provide energy for the AT&T materials distribution facility in Lancaster, Texas.

The 677 kilowatt ground-mount solar power plant is the latest collaboration between the companies. The system is constructed using 2,000 high-efficiency SunEdison solar panels. SunEdison is also working with TerraForm Power on this project.

"SunEdison and AT&T have a long history of working together to develop and implement renewable energy systems at AT&T sites in New Jersey and California," said Rafael Dobrzynski, SVP and General Manager of Commercial and Industrial Distributed Generation at SunEdison.

In recent weeks SunEdison also announced that it was working with PermaCity to lease publicly and privately owned rooftops in the Los Angeles Department of Water and Power  service area with a view to sell the combined 22MW completed rooftop arrays to TerraForm Power.

The properties chosen in the programme are eligible for financial incentives and property upgrades that can increase cash flow and property value. Once a system is installed, owners will receive an annual lease payment funded by the sale of the electricity generated by the solar panels. In lieu of annual lease payments, other incentives include at no cost roof repairs, a net metering solar installation to offset and reduce current electricity bills, or energy efficiency upgrades and building control systems. The systems will be installed using PermaCity's non-penetrating racking system.

SunEdison will provide financing, SunEdison solar panels, and procurement and engineering expertise for the projects. PermaCity will manage the construction of the projects in cooperation with a SunEdison operations team.