Some industry insiders are reconsidering the future framework in the REIPPP, whereby the IPP would be expected to take responsibility for building immediate transmission connections, while Eskom would be responsible for just the larger grid. 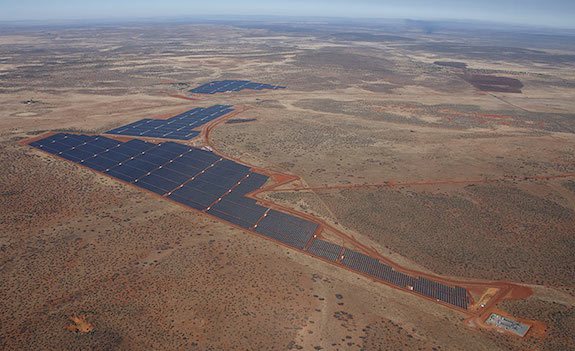 The coal and oil industries have historically supplied most of the electricity delivered by South Africa’s state-owned utility, Eskom. But under the nation’s ambitious Renewable Energy Independent Power Producer Procurement Program (REIPPP), the nation targets nearly 7 GW of renewable energy by 2020.

It is an ambitious target for a nation historically so dependent on centralised fossil-fuelled electricity, with 85 percent of its supply coming from coal-fired power stations.

For South Africa’s financially troubled state-owned utility, Eskom, its business has become extremely volatile, due not just to the nature of the load they have to supply, but also to the big change in the type of generation that must now be hooked up to the grid to meet the REIPPP, intermittent renewable generation.

Even the locations of plants is changing, because now wind or solar farms must be located where the renewable resource is best. Yet South Africa’s grid was historically set up to send most of its electricity from 16 coal-fired power plants clustered centrally within one area; the western Highveld of the Mpumalanga Province.

Transmission has emerged as a major critical risk for PV developers. Eskom emphasises that the network must be strengthened to allow the addition of any new independent power producer (IPP) connections.

“It is good to have a nice generation plan, but the grid has to be able to accept that power to be constructed; in quality, and quantity,” he says.

Some industry insiders are now reconsidering the future framework in the REIPPP, whereby the IPP would be expected to take responsibility for building immediate transmission connections, while Eskom would be responsible for just the larger grid.

Even without adding capacity in new regions for renewables, South Africa’s existing grid already has numerous challenges. Most of the electricity infrastructure is about 50 years old. Significant investment is now required, to address service delivery challenges, maintenance and refurbishment backlogs, and to strengthen the network - let alone to position the grid for the demands of a carbon-constrained future.

The state-owned utility for the continent’s second-biggest economy has notoriously struggled to keep the nation’s lights on in recent years. Its dwindling supply of coal is of worsening quality, and produces erratic power. Although it is building the world’s largest coal plant, many have concerns about the practicality of Eskom’s ageing fleet of fossil-fuelled plants is becoming more susceptible to breakdowns due to shortages; and not just of fossil fuels, but of water.

Meanwhile, as the only nation within the African continent producing substantial amounts of electricity, South Africa is essentially a power island. It is unable to import significant power in an emergency. Delays in new plant openings have only added pressure. And Eskom already operates on a hair trigger, with only 1 percent in reserve capacity.

In December, Eskom ran out of water and diesel and some plants tripped. To prevent a system-wide grid collapse, it had to cut 6GW of power in managed blackouts asked of some of its biggest customers. In total, Eskom has 42GW of installed capacity, and an average of 22 percent of that was out for maintenance in 2014.

The relative speed and nimbleness of solar plant construction is one advantage.

“We need build power fast and the quickest way to do that is through renewables, and our utilities just have to learn. They don’t have a choice anymore,” says Chair of the South African Photovoltaic Industry Association, Davin Chown.

“Demand is volatile, it’s not as predictable and static and stable as it used to be, so those utilities are no longer well suited to the kind of way the world has progressed and evolved. You need smaller, more flexible, more responsive power stations. The smaller power producers can do that,” says Chown.

Beginning with the fourth bid window, Eskom is to get input to mitigate intermittency in preferred bidder selection in REIPPP. Eskom says it faces serious grid constraints. It has concerns about the additional cost of connecting renewables, due to the need to invest in additional back-up.

One way for the solar industry to prevent the inclusion of carbon-heavy back-up is to add clean energy storage nearby on the same transmission line, either with batteries or by the adjacent siting of solar with storage.

For California’s SolarReserve, now completing its 110 MW Crescent Dunes CSP project with molten salt energy storage, South Africa’s strong policy signal in the REIPPP led to its decision to invest in both photovoltaics (PV) and concentrated solar power (CSP) there.

The firm believes that siting CSP projects with storage alongside PV projects provides the most cost effective dispatchable power. CSP with molten salt storage supplies solar electricity through steam driven turbines. With thermal energy storage, steam turbines can be operated at any time.

CSP with storage also helps amortise the investment needed in new transmission for a PV project, because by operating off of stored energy before sunrise and after sunset, the use of the new transmission is spread out over the maximum possible hours in the day.

And of course, there’s battery storage, and the use of inverters that can help firm up voltage on the grid.

PV developers in South Africa should come prepared to offer solutions. In South Africa, mitigating renewable energy intermittency with clean alternatives will be the best way to wean the state utility off the fossil fuels it has grown most comfortable with.