Jordan’s Round 2 (2013-2015) tender of solar PPAs saw record low feed-in tariffs (FITS), with the four lowest bids at prices 50% below those in the first tender, according to bid results sent from the government to participants on May 13. 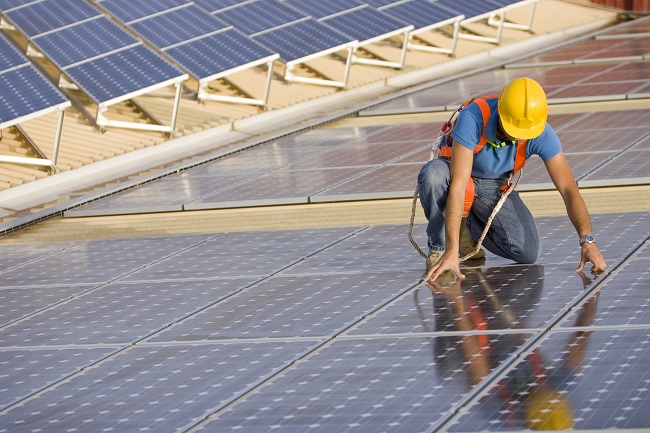 The drop in tariffs since the first tender held in 2011-2013 reflects the dramatic descent of the cost of solar power in Jordan.

The lowest tariff in the second round was submitted by Greek company G. I. Karnomourakis S.A. SunRise PV Systems, which placed a bid of just 6.13 US cents per KWh, followed by Saudi Oger with 6.49 cents per KWh, Fotowatio/ALJ with 6.91 cents per KWh and Hareon Swiss Holding with 7.67 cents per KWh.

Overall, the bids in the Round 2 tender ranged from 6.13 cents to 13.27 cents per KWh. While 33 companies submitted an initial application under the tender, only 24 filed financial bids.

Jordan will allocate 200 MW (4 x 50 MW) of solar PV power projects in the second round auction to the final top four bidders, pending detailed commercial and technical evaluation of the bids. All four will sign a 20-year power purchase agreement (PPA) with the country’s National Electric Power Company (NEPCO).

Near record-low tariff
SunRise PV Systems’ tariff is within 10% of the record-low tariff in the Dubai Electricity and Water Authority (DEWA) public tender, which saw Saudi Arabia’s ACWA Power bidding an unprecedented 5.98 cents per KWh in a fully commercial, unsubsidized setting.

The Greek company, which has never executed a project of this size, says it is banking on its agility and technical quality to edge out competition from companies with bigger balance sheets and project pipelines.

“The aim of our company is to try to reach the maximum number of KWh per KW produced. We really gave emphasis to the whole design and tried to really improve the design in order to get this very good result,” SunRise PV Systems Commercial Manager Alexandros Aris Papachristou told PV Insider.

“[Good engineering] is our bet against everyone else. And you can see that from the results and from the rigorous evaluation, which we passed straight away without any need for clarifications or modifications to our original technical proposal. It is very clear that good engineering gave us this edge to come at the very top of the technical and financial evaluation.”

The company, which specializes in both business development and engineering, procurement and construction (EPC) services, has secured equity for the project and is in negotiations with several major banks to raise debt financing, according to Papachristou.

The proposed 50 MW plant is to be built on public land in the Mafraq region in northern Jordan, one of the two recommended areas allocated by the Jordanian government.

SunRise PV Systems is currently executing projects of capacity between 1.5 MW and 24 MW and it plans to focus on building larger-scale projects to take advantage of economies of scale. The company’s pipeline includes projects and tenders in Jordan, Turkey, Egypt, Bahrain, Qatar and Saudi Arabia, among others.

Ramping up solar in MENA
The results from Jordan’s latest tender suggest that a “tariff of 6-8 US cents is the new benchmark for utility-scale solar projects in the stable markets in the Middle East,” according to the Middle East Solar Industry Association (MESIA).

“What this is telling you is that the industry is at an inflection point,” MESIA President Imtiaz Mahtab told PV Insider.

“What does 6 cents mean? It actually means that [the price of electricity is equivalent to a conventional power plant burning oil priced at roughly $20 per barrel] or if you have natural gas at $4/mmbtu. This is quite significant. This is going to drive the industry forward.”

PV prices have finally reached grid parity in Jordan and the United Arab Emirates, and are approaching that level in Egypt and Morocco, experts revealed at MENASOL 2015 in May.

In the MENA region, PV capacity is forecast to grow 66% by 2019 to almost 3 GW, with power demand forecast to grow 6% per year over the same period, Gulnara Abdullina, business development manager at crystalline manufacturer Jinko Solar, said at a MENASOL panel session.

The increasing competitiveness of unsubsidized solar with conventional energy will drive banks and other financial institutions to provide more liquidity to PV projects in the region, according to Mahtab.

“We will see more enthusiasm, more funds flowing to these projects because the economic fundamental does not rely on any sort of incentives,” he said.

Saudi Oger, in particular, came from last place in the DEWA tender to finish in the top four in Jordan.

The tender also solidified the presence of PV developer Fotowatio Renewable Ventures, which showed it could be highly competitive on large-scale solar IPPs. The company, which was acquired by Saudi Arabia’s Abdul Latif Jameel earlier in 2015, is likely to become a leading player in the MENA solar market, according to MESIA.

The results in Jordan will send a strong signal to other MENA PV markets, especially Saudi Arabia, where the solar market has been slower to develop, MESIA said in a statement on May 18.

In January this year, Saudi Arabia announced it would delay by eight years its plan to implement a massive clean energy program including $109 billion in solar power, saying that it needs more time to evaluate what technologies it would use.

The country originally intended to produce a third of the nation’s electricity from solar power by 2032 and more from geothermal, wind and nuclear reactors. Saudi Arabia has also indicated it plans to develop a fully vertically integrated renewable energy sector.

Though the new timeline is likely to slow down the pace of solar deployment, the program nevertheless has allowed Saudi companies to form joint ventures with international companies, and build up capacity and organizational structures that allow them to raise large-scale financing at very attractive rates and compete at tenders throughout the region, according to Mahtab.