Pakistan was barely on the radar of solar developers a few years ago but well-budgeted companies like First Solar, Access Power, and Gransolar are now flocking to the market to benefit from healthy new Feed-in-Tariffs. 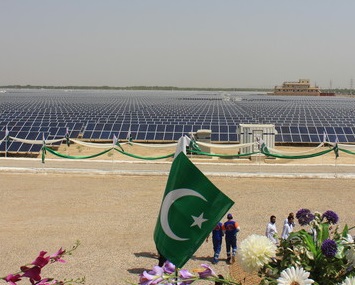 A lack of power generation in Pakistan presents the country with electricity deficits of over 5 GW and this has led to a strong national drive towards renewable energy development.

The new feed in tariff rates vary depending on the project’s location. Southern areas have better radiation and this is taken into account along with the project sizes, with thresholds ranging from 20 MW to 100 MW.

At present, there are 24 independent solar power projects in Pakistan at different stages of development and with a cumulative capacity of nearly 800 MW.

“We have a very attractive FiT regime for renewable energy and guarantee a return on investment between 17% and 18%. For solar PV, we offer between 14.75 and 15.00 US cents per kWh, depending on the capacity,” said Nafees Khan, Advisor of International Cooperation at the Alternative Energy Development Board (AEDB) within the Government of Pakistan.

He added that there are no import or custom duties on renewable energy equipment and no sales taxes. Moreover, repatriation of equity along with dividends is allowed and conversion of Pakistani rupees to US dollars is also an option.

“The salient features of our policy include guaranteed purchase of renewable-energy generated electricity and that grid provision is the responsibility of the purchaser, which is a government entity,” Khan added.

In addition to his advisory role for the government, Khan also oversees mapping of World Bank-funded renewable energy projects in Pakistan.

This favourable investment climate explains why a number of solar power giants are aggressively pursuing opportunities in the market. While First Solar plans to develop 1,000 MW in the country, Access Power MEA is looking to invest over $100 million in the local renewable energy sector over the next 12-24 months.

“Pakistan is one of the most exciting and promising markets in the region. It is a large country, with a huge population, growing GDP, and dramatically underserviced power sector, so there is great demand for power generation,” Vahid Fotuhi, director of origination at Dubai-based Access Power and founder of the Middle East Solar Industry Association (MESIA) said.

“We have been developing projects in other countries and our budget for Pakistan is extremely high,” Said Istambuli, director of business development at Gransolar revealed during MENASOL 2015.

Opportunities have also been increased by the recently announced mortgage finance scheme that allows homeowners to borrow up to $50,000 against their mortgage to fund a rooftop PV installation.

This scheme, along with the removal of import and sales taxes on solar panels, attracted companies such as Germany’s GreenIndusTree, a specialist in decentralized solar energy storage systems. It entered the market in April after teaming up with module producer Aleo Solar GmbH.

In order to prequalify for a solar project, a company first applies for the tariff, makes the initial application to the provincial government where the project is going to be located, and the government provides a letter of intent, setting out certain timelines and conditions.

“The next step would be to get the land allocated – the title of the land is normally not a problem for solar and wind plants, simply because they tend to be in remote areas,” Rashid Anwer, partner at Pakistani law firm Khalid Anwer & Co said.

Once the land is allocated, the clock starts ticking and the developer has about five months to achieve financial close, after which they need to build the project and get it up and running.

Pakistan’s timeline may seem rigid and its FiTs may appear high compared to tariffs in other markets, but in reality the tariffs are a fraction of the financial losses that the country incurs because of power cuts.

“The cost to produce 1kWh ranges from 5.8 to 14 US cents, so anyone who plays intelligently has that margin available to him, and we are one of the very few countries that provide that space to any investor,” Khawaja Muhammad Naeem, Vice Chairman and member at NEPRA in Punjab said.

For the time being, international investors want local regulators to ensure that despite any change in local regimes, the proposed tariffs are not compromised in the years ahead as was the case in other markets.

“[Our] policy is that we give at least 17% dollar-based returns to investors. There is no possibility in Pakistan that the tariff will change - it has not happened in the last 25 years and there is no reason to think it will happen now,” Mehfooz Qazi, Director of Alternative Energy at the Energy Department of the Government of Sindh said.

According to Qazi, all PPAs are guaranteed by an implementation agreement, which is signed by the Government of Pakistan. This means there is a sovereign guarantee attached to the payment.
The government also offers a rate of 4% above the Karachi Banking Rate.

These include a 1.25 MW PV plant completed by Phono Solar in February 2015, and the first 100 MW of the 1 GW Quaid-e-Azam Solar Park. The latter is constructed by Tebian Electric Apparatus Stock Co. and was inaugurated in May. In the same month, Yingli Solar completed a 1 MW solar system atop Pakistan’s Parliament building.

The $23.7 million Quaid-e-Azam Solar Park is a flagship project of the China–Pakistan Economic Corridor (CPEC). Established and owned by the Government of Punjab, it will see another 300 MW of PV capacity come online by the end of 2015, and the remaining 600 MW by the end of 2016.

With nearly 800 MW of solar IPPs and the 1 GW Quaid-e-Azam project set to come online in the next year and a half, Pakistan should have close to 2 GW of installed solar capacity by the end of 2016, around a third of the country's current electricity shortfall.