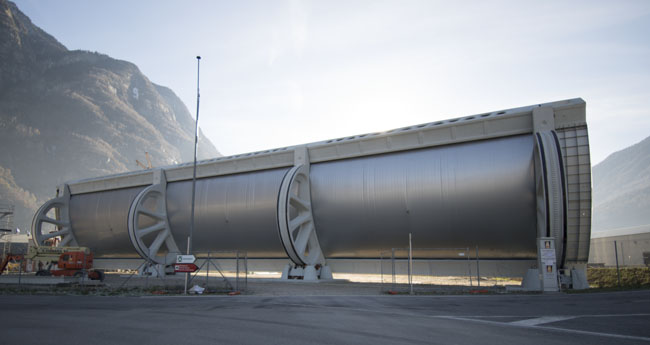 In order to extensively test the actual products and their future developments...

IBM Research and Switzerland’s Airlight Energy have improved on their CPV technology, which is in the form of a new parabolic dish that increases the sun's radiation by 2,000 times while also producing fresh water and air conditioning.

The new Concentrator PhotoVoltaics (CPV) system uses a dense array of water-cooled solar chips that can convert 80% of the sun's radiation into useful energy.

Back in 2013 it was reported by IBM that a three-year, $2.4m (2.25 million CHF) grant from the Swiss Commission for Technology and Innovation had been awarded to scientists at IBM Research; Airlight Energy, a supplier of solar power technology; ETH Zurich (Professorship of Renewable Energy Carriers) and Interstate University of Applied Sciences Buchs NTB (Institute for Micro- and Nanotechnology MNT) to research and develop an economical High Concentration PhotoVoltaic Thermal (HCPVT) system.

IBM and Airlight Energy are currently piloting the technology and expect to begin selling it by 2017.

Exosun, a provider of solar tracking technologies for utility-scale ground-mounted photovoltaic plants with several CPV contracts under its belt, has signed an agreement with La Compagnie du Vent, GDF SUEZ Group, to supply solar trackers and associated engineering support services for a 12 MWp PV plant situated in the centre of France.

The plant will be installed over 43.2 acres near the city of Tulle, in the Corrèze region, and is expected to produce 14,355 MWh per year, corresponding to the annual electricity needs of 8000 people.

In addition, Exosun will accompany La Compagnie du Vent in the construction, commissioning, operation and maintenance phases of the project in order to ensure optimal tracker performance and maximal plant production. Exosun will also provide its client with tracker installation and O&M trainings.

Tracker installation will start April 2015 with commissioning scheduled for the third quarter of 2015.

This new project, winner of the first French call for tenders for large-scale PV installations, consolidates Exosun and La Compagnie du Vent’s partnership which began in 2012 with a first plant in Corsica, France, followed by the construction of the biggest PV plant equipped with solar trackers located in South-West France.

Previously reorted, Exosun and Soitec, one of the stronger players in the CPV modules space, joined forces earlier this year to offer a new CPV system. Comprising an Exosun tracker holding 18 to 24 Soitec CPV modules, the CX S540 model delivers output per unit reaching up to 61.2 kW.

Already being sold by both companies, it will be used in the majority of CPV projects that the French Ministry of Energy selected at the end of the second call to tender for large-scale photovoltaic installations that the French energy regulator, the CRE, issued in March 2013.