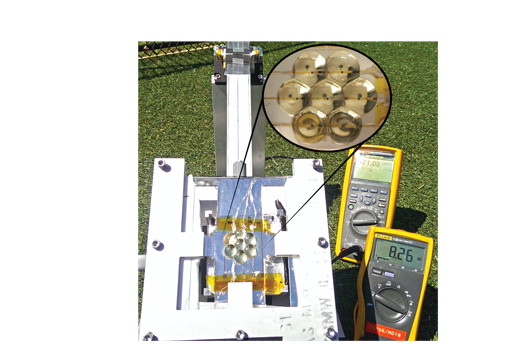 Previous attempts at such translation-based tracking have only worked for about...

To enable CPV on rooftops, researchers at Penn State and other research facilities have combined miniaturized, gallium arsenide photovoltaic cells, 3D-printed plastic lens arrays and a moveable focusing mechanism to reduce the size, weight and cost of a CPV system to be placed on the south-facing side of a building's roof.

According Penn State, to focus sunlight on the array of cells, a team of researchers embedded them between a pair of 3D-printed plastic lenslet arrays. Each lenslet in the top array acts like a small magnifying glass and is matched to a lenslet in the bottom array that functions similar to a concave mirror. With each tiny solar cell located in the focus of this duo, sunlight is intensified more than 200 times. Because the focal point moves with the sun over the course of a day, the middle solar cell sheet tracks by sliding laterally in between the lenslet array.

Previous attempts at such translation-based tracking have only worked for about two hours a day because the focal point moves out of the plane of the solar cells, leading to loss of light and a drop in efficiency. By sandwiching the cells between the lenslet arrays, the researchers solved this problem and enabled efficient solar focusing for a full eight hour day with only about 1 centimeter of total movement needed for tracking.

"Current CPV systems are the size of billboards and have to be pointed very accurately to track the sun throughout the day. But, you can't put a system like this on your roof, which is where the majority of solar panels throughout the world are installed."

Giebink notes that the falling cost of typical silicon solar cells is making them a smaller and smaller fraction of the overall cost of solar electricity, which also includes "soft" costs like permitting, wiring, installation and maintenance that have remained fixed over time. Improving cell efficiency from about 20 percent for silicon toward greater than 40 percent with multi-junction CPV is important because increasing the power generated by a given system reduces the overall cost of the electricity that it generates.

"We partnered with colleagues at the University of Illinois because they are experts at making small, very efficient multi-junction solar cells," said Giebink. "These cells are less than 1 square millimeter, made in large, parallel batches and then an array of them is transferred onto a thin sheet of glass or plastic."

To lubricate the sliding cell array and also improve transmission through the lenslet sandwich they used an optical oil, which allows small motors using a minimal amount of force for the mechanical tracking.

"The vision is that such a microtracking CPV panel could be placed on a roof in the same space as a traditional solar panel and generate a lot more power," said Giebink. "The simplicity of this solution is really what gives it practical value."

Because the total panel thickness is only about a centimeter and 99 percent of it -- everything except the solar cells and their wiring -- consists of acrylic plastic or Plexiglas, this system has the potential to be inexpensive to produce. Giebink cautions, however, that CPV systems are not suitable for all locations.

"CPV only makes sense in areas with lots of direct sunlight, like the American Southwest," he said. "In cloudy regions like the Pacific Northwest, CPV systems can't concentrate the diffuse light and they lose their efficiency advantage."

The researchers tested their prototype concentrator panel outside over the course of a day in State College, Penn. Even though the printed plastic lenses were not up to specification, they were able to demonstrate over 100 times solar concentration.

CPV solar technology has the potential for delivering solar electricity at a cost-competitive level in regions with high direct irradiation values with an expected boost in uptake in 2015, according to a new report.

CPV is at an important stage of its technological development boosting its cost and efficiency breakthroughs, a report by Germany’s Fraunhofer Institute for Solar Energy Systems ISE and the U.S. National Renewable Energy Laboratory (NREL) has reported.

With Fraunhofer testing reporting record efficiencies of 36.7% for CPV modules and 46% efficiencies for CPV cells in laboratory conditions, the report highlights that commercially available CPV modules are already regularly exceeding 30% efficiency. However, costs are still higher than those of other solar technologies, despite less cell efficiency ratios.

The report has said that CPV technology is most effective in sun-rich areas with Direct Normal Irradiance (DNI) greater than 2,000 kWh per square meter. Markets that are already utilising the technology include China (145 MW), the U.S. (79 MW), South Africa (42 MW), Italy (20 MW) and Spain (18MW), with Australia, Portugal, Greece and Chile only building on a comparatively smaller scale. At the time of writing, only 330 MW of CPV solar power is grid-connected globally.

The CPV segment needs greater uptake of its technology and at ideal conditions to provide the wider renewable energy sector more success stories for LCOE. If installations continue at the current pace through to 2030, LCOE for CPV systems could fall to as low as €0.045/kWh, states Fraunhofer – at which point the technology would outperform conventional PV on cost.

But that is more than a decade away, putting the pressure on the CPV sector to find more ways (i.e. commercial rooftop) to get large scale deployment of CPV technology onto the grid in the next two years to avoid more disappointment.