Palen Solar Holdings (PSH) has made a change in the plan of the 500MW Palen power tower project that could now steer it safely through California’s notoriously arduous permitting process. 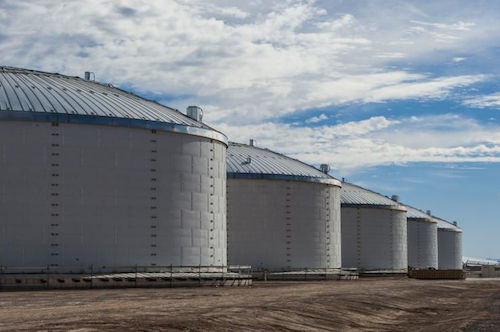 In its most recent filings with California regulators, PSH, the partnership of Abengoa and BrightSource Energy, has proposed to add storage as a Condition of Certification, under which they would agree not to start construction of the second of Palen’s two Concentrated Solar Power (CSP) units until they have filed an amendment and received approval to incorporate thermal energy storage in the second unit.

The proposal helps reduce some issues regulators have had.

“Since we are giving you a condition that we will not build until we put thermal energy storage, we are preventing ourselves from building the second tower until such an amendment is approved,” says attorney Scott Galati for PSH, in a filing with the California Energy Commission (CEC).

Aside from the obvious benefit of storage in a state which has actually mandated 1.3GW of storage, on top of a 33% renewables mandate which will exacerbate the need for storage, there are many additional benefits in this proposal.

Time to become familiar with CSP

Given the lengthy permitting process, this new schedule would give the CEC time to become more familiar with CSP power towers and storage, and allow PSH to go ahead with the first 250MW unit, essentially splitting the 500MW project in half.

The CEC has regulated thermal projects in California since 1974. With very little coal in the state, these have been predominantly natural gas, with some geothermal and biomass, as well as the first SEGS trough “solar thermal” CSP project from the 1980s.

In the last five years, the CEC has had to get up to speed fast, with the first of a new boom in CSP projects coming online this year.

By December, based on issues raised by Ivanpah - the first power tower CSP to come online in the US - it seemed that Palen would be denied unless as a trough project.

But this month’s surprise proposal to split the 500MW project development and add storage to 250MW has been warmly received by the CEC.

Slowing down the process by splitting it into two separately permitted phases has some real benefits.

Proof of power tower with storage

Extra time for permitting the second 250MW unit - which could perhaps take another two years, should help provide the CEC with some hard evidence of the success of storage at the first power tower that includes storage.

SolarReserve’s 110MW Crescent Dunes power tower CSP in Arizona is due online in March of 2015, according to Nevada Renewable Energy Project Manager for the Bureau of Land Management (BLM) Greg Helseth. To supply Las Vegas nightlife for NV Energy, its generation is contracted from noon to midnight - thanks to storage.

“I think Crescent Dunes is going to go a long way as a model for CSP technology with thermal storage,” says Helseth.

“Thermal storage on that scale with molten salt - I don’t know of anything that's been done till now - it’s all just theory. I mean, the salt in the tanks loses just one degree of heat over thirty days!”

In discussing the longer time it takes to build a CSP plant (than PV) versus the value of storage, he adds; “there's going to be a lot of eyeballs watching it, but if the storage technology does as well as expected then I think utilities will say that it's worth the wait; because they can get power at night.”

Reduction of natural gas use

Because it can use storage from the day before, this power tower CSP project will need no natural gas for morning startup. One of the obstacles has been the fact that Palen’s predecessor, Ivanpah, uses natural gas to start up in the morning.

As previously proposed, Palen, with no storage, would similarly need some natural gas for that initial startup, but no more natural gas than the 20% smaller Ivanpah project, due to efficiency improvements.

But, Palen with storage, as the partners now propose for the second tower, could use some stored energy for startup before sunrise, further reducing its use of natural gas, for the second of its two units.

So the storage proposal also reduces the use of natural gas, reducing another permitting obstacle.

Even though Palen is a power tower, in some respects, it would be more like Abengoa’s trough project in Arizona, Solana, than the seemingly similar power tower project; Crescent Dunes, which both include storage.

Crescent Dunes heats molten salt in the tower, and stores the heat in the same molten salt, in the tanks, switching to steam for generation.

But both Ivanpah and Palen heat water in the tower, flashing it to steam for direct delivery to the turbines.

Because water or steam is not an efficient long term storage medium, if Palen were to add storage, it would need to “bolt on” molten salt storage tanks for storing the heat.

That would make Palen more analogous to Solana, which uses heat transfer fluid in its collectors, then stores that heat in molten salts, then transfers the heat to steam.

Proof of success at Solana

Since coming online in 2013, Abengoa’s Solana project has been undeniably successful in supplying Arizona Public Service (APS) with power on demand, which, with the increasing amount of daytime rooftop solar in Arizona, is mostly now in the new evening peak.

After Solana had been operating for four months, CSP Today spoke with APS General Manager of Renewable Acquisitions Brad Albert who negotiated the contract, that included six hours of storage, to cover the evening demand.

Albert was very enthusiastic about how Solana’s storage was successfully covering the new evening peak load, which has increased as rooftop PV supplies more of Arizona’s daytime needs.

“As more and more PV is added to the system, between here and Southern California, the more beneficial it’s going to be to have storage like Solana,” Albert said. “The hours that we care most about have been evening peak after the sun goes down. So we’ve been positioning the storage to be able to deploy and keep producing power during those two, three, or four hours after the sun goes down at night.”

Solana time-shifts its generation to the evening hours. But especially in winter, when people are getting up in the dark to get to work, it is also scheduled to supply predawn demand.

In addition, under the terms of its power purchase agreement (PPA), Albert said the utility can also make short term requests, even with short notice, for Solana’s storage to be deployed to cover an expected shortfall the next morning, for example, if APS needs to perform maintenance at one of its coal plants.

California’s PG&E, which holds a PPA for Palen, also has days when demand is expected to be heavy for a period the following day. At these times PG&E announces a Flex Alert, a Demand Response initiative designed to get consumers to voluntarily reduce grid demand.

If the inclusion of storage finally eases Palen’s path through permitting, then PG&E could have another option, as Arizona Public Service already has.

To comment on this article, please write to the author, Susan Kraemer.