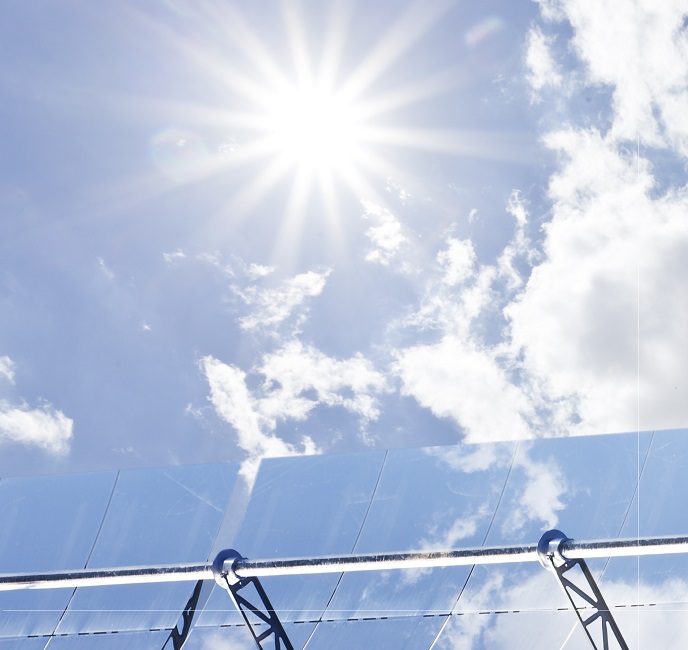 Researchers at the United Arab Emirates' Masdar Institute and the Massachusetts Institute of Technology (MIT) have jointly developed a new high-performance solar absorber which could lower the cost of CSP generation, the Masdar Institute said in a statement.

The new absorber uses an ultrathin nano-composite film made of silver and silica, topped with silver nanoparticles, to absorb nearly 100% of sunlight energy from the ultraviolet and visible portions of the solar spectrum, the Institute said.

Advanced microscopy showed traditional solar absorbers were filled with tiny nano-particles of each composite element and large nano-particles on the top surface. Further studies showed the top layers of nano-particles make absorbers more efficient and the scientists used this knowledge to build the nano-composite film.

The researchers worked with engineers at the 100 MW Shams 1 parabolic trough plant in Abu Dhabi to develop a desert-specific product.

“The technology we have demonstrated is particularly attractive for hot-arid regions, such as Abu Dhabi, with potential applications in waste water treatment, seawater desalination, and power generation,” Professor Gang Chen of MIT, said. The U.S. Department of Energy (DOE) has awarded $4.6 million to three CSP research projects in the latest round of funding under its Sunshot Initiative program, the department said July 12.

In total, some $46.2 million was awarded to 48 solar projects. Cost share requirements will yield a total public and private investment of nearly $65 million, the DOE said.

Colorado's Solar Dynamics was awarded $1.6 million, with cost share at $400,000, to develop a new CSP trough collector that uses glass mirrored space frames, to be used in peaker power plants.

The Sunshot Initiative was launched in 2011 to accelerate reductions in solar power costs. The program aims to reduce the levelized cost of energy (LCOE) of CSP plants to below $60/MWh by 2020. Average CSP project costs fell from $210/MWh in 2010 to $120/MWh in 2015, according to government data.

Average U.S. utility-scale PV costs are now at around $70/MWh and the Sunshot team have set a target for PV costs below $30/MWh by 2030.

In its latest round of project funding, the DOE will provide $25.7 million to 20 solar projects under its "Technology to Market: Incubator" scheme. A further $20.5 million will go to 28 projects which develop next-generation modules and PV technologies, most of which are academic institutions.

A number of the projects funded under the technology incubator scheme focus on data-driven inventions.

Some of these projects target the utility-scale and commercial solar markets. For example, San Francisco's KryptonCloud will receive $885,711 in DOE funding to develop an "advanced, big data analytics decision engine to reduce operations and maintenance costs for utility-scale solar projects," the DOE said.

The Boston-based Energetic Insurance project will receive $800,000 from the DOE to research "novel, data-driven, actuarial models that will allow for substantial expansion of the commercial solar market by mitigating offtaker credit risk," it said.

NRG plans to sell up to 100% of US renewables assets

NRG Energy plans to sell between 50% and 100% of renewables assets held by its NRG Yield business under a new transformation plan announced July 12.

NRG is the U.S.' largest independent power generator, operating a total of 50 GW of capacity. The company operates 1.2 GW of solar assets including the 400 MW Ivanpah CSP tower plant.

NRG has transformed from a conventional energy business into a diversified renewables and fossil fuel power generator, but its share price has suffered.

Following pressure from activist investors, NRG agreed in February to conduct a strategic review of its business and examine potential asset sales.

"This plan is the result of a comprehensive review of our entire business by the board and management to simplify our business, right-size our portfolio and strengthen our balance sheet to create significant value for all our stakeholders," Mauricio Gutierrez, President and CEO, NRG, said in the company’s latest statement.

"The strategic alternatives span a variety of ownership structures and partnerships,“ NRG said in its statement.

Options include “the potential partial or full monetization of the renewables platform and NRG’s interest in NRG Yield with a goal to optimize how NRG participates in renewables and to deconsolidate the associated debt," it said.

California's SolarReserve has received environmental approval from the Chilean government for its 390 MW Likana CSP tower project, the company said in a statement.

The Likana project, situated in the Antofagasta region in northern Chile, would provide energy for 24 hours a day at a price competitive with fossil fuel-fired generation, SolarReserve said.

The plant would comprise of three 130 MW solar towers, each providing 13 hours of full load energy storage. This would equip the plant with 5.1 GWh of energy storage capacity and the potential to generate over 2,800 GWh per year.

The Likana plant would operate at capacity and availability factors "equal to that of a fossil-fired power plant," according to the company.

SolarReserve has argued that a surplus of intermittent PV capacity in Chile improves the business case for CSP plants with storage. Aggressive PV buildout and transmission grid restraints have pushed down wholesale daytime power prices.

In Chile's last power auction in August 2016, SolarReserve bid a record-low CSP price of $64/MWh. However, no CSP projects were allocated in the auction. A total of 12.4 TWh of new power generation was contracted at an average price of $45.1/MWh and some 52% of capacity was awarded to wind and PV projects, according to reports. PV was contracted as low as $29.1/MWh and wind power at $45.2/MWh, according to the International Renewable Energy Agency (IRENA). Bloomberg reported natural gas-fired projects sold at $47/MWh, coal-fired generation at $57/MWh, hydroelectric power at $60/MWh and geothermal at $66/MWh.

The Bundang-Gu Pozo Almonte project would consist of 700 MW of PV and 300 MW of CSP capacity, media reported July 21.