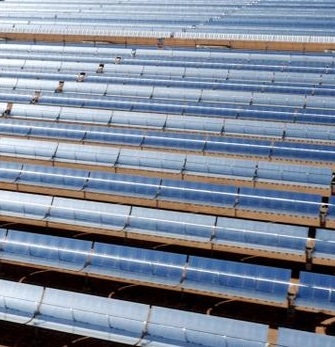 China will own 49% of the world's most active CSP developer in recent years. (Image credit: Masen)

ACWA Power is a leading solar and wind developer in the Middle East and North Africa (MENA) and the dominant developer of CSP plants in the region.

ACWA Power signed a record-low power purchase price of $73/MWh for the project with the Dubai electricity and water authority (DEWA), which will own half of the project equity. ACWA Power has also been a key player in Morocco, where it has developed three CSP projects for a total capacity of 510 MW and three PV plants for a capacity of 177 MW.

Spanish group Refractaris is to supply the thermal heat shield for the CSP tower section of the 950 MW Noor Energy 1 CSP-PV plant in Dubai, UAE, Refractaris said in a statement.

Shanghai Electric is the contracted Engineering, Procurement and Construction (EPC) supplier and the project will include technologies from a wide range of European and U.S. suppliers.

For Noor Energy 1, Refractaris signed its supply agreement with Shanghai Boiler Work, which is responsible for the construction of the tower receiver.

The Noor Energy 1 plant will be brought online in phases in 2020-2022 and the first parabolic trough plant and central tower unit are currently on schedule to be completed by October 2020.

"Concrete thermal energy storage has the potential to be significantly cheaper than batteries with a smaller footprint. It also has the potential for longer-duration storage, which will be critical as more wind and solar come on-line," EPRI said.

The CTES system transports high-pressure steam from power plants through tubes, heating and storing the modules ready for conversion to electricity.

Funded by the U.S. Department of Energy (DOE), EPRI and its project partners will design and build a pilot 10 MWh CTES system which will be integrated into an existing coal plant for testing.

"The testing will establish the capabilities of the CTES system in a real-world environment, demonstrating its efficiency and ability to handle flexible operating conditions. In addition, an analysis will be done to determine the costs and benefits of a full-scale application of CTES technology," EPRI said.

Initial work on the project will start in October and the pilot system is expected to be operational by early 2021.